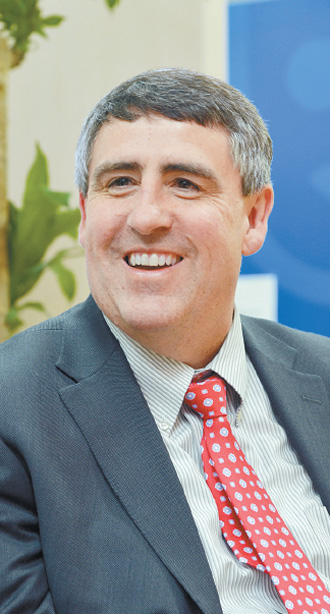 Goodwill Industries International President and CEO Jim Gibbons browsed around the organization’s 10th Korean store during a visit to Seoul earlier this month.

Visually impaired and using a walking stick, Gibbons met with five young Koreans who have been working at the store in Jeungsan-dong, northwestern Seoul, since it opened last month. Like Gibbons, they all have physical or mental disabilities.

The Jeungsan store is Goodwill’s first collaboration with the Korean conglomerate Hyosung, which says it has spent 600 million won ($565,000) on the store. The store has a total of 10 employees and sells material collected by Hyosung employees and its corporate partners as well as neighbors and famous athletes.

“Being part of Goodwill Korea is a real special thing for me both in my heart and head, because the Korean work ethic, leadership and innovation all come together, and who knows maybe Goodwill Industries Korea will overtake the United States in terms of size and impact,” Gibbons said.

Goodwill Industries generates an annual revenue of 5.5 trillion won, which funds employees’ training and salaries, according to the company. There are Goodwill branches in the United States, Canada and 13 other countries.

Yoo Young-kyun, secretary general of Goodwill Korea, said Gibbons has been largely responsible for the company’s overseas expansion and spreading the social enterprise business model to more parts of the world. He has been at the helm of Goodwill since 2008.

Although he started losing his sight at the age of 10 and was blind at 19, Gibbons earned an undergraduate degree in industrial engineering at Purdue University and a master’s in business administration at Harvard Business School. He worked at AT&T, a leading American mobile carrier, for about a decade, specializing in product management and mergers and acquisitions (M&A), and became CEO at the company’s campus commerce and security subsidiary called Campus Wide Access Solutions.

He turned to social enterprises as president and CEO of National Industries for the Blind, an organization similar to Goodwill.

In an interview with the Korea JoongAng Daily, Gibbons said his message for social enterprise start-ups is that they can achieve profitability and create jobs without sacrificing their contribution to society. He also discusses his own life as a way to encourage Koreans with disabilities to become active participants in the economy and society at large.

Q. What led you to partner with Hyosung?

A. Up until now, the stores of Goodwill Industries of Korea (GIK) have been started and operated with support by churches and government agencies, but they also have received support from corporations in many ways, including donated goods, monetary donations and volunteers. However, Hyosung is the first corporation to have ever made a direct investment to start a Goodwill store. We believe it is an opportunity for GIK to find a niche and develop a model for a more meaningful partnership that is beyond just a one-time monetary donation.

How would Goodwill benefit from an association with a private company?

Through this model, private sector companies will be able to contribute directly to Goodwill store operations, but it will also be an opportunity to engage through their families, companies and other stakeholders. We also look forward to an opportunity to benefit from the corporations’ financial expertise and operational know-how, as well as other business expertise to quickly develop the Goodwill stores.

Also, working with corporate partners is a key strategy for diversifying job-creation opportunities for people with disabilities to work elsewhere in the community despite barriers to employment.

What is the strength of Goodwill as a social enterprise?

Ultimately, Goodwill exists in every community as a self-sustaining organization that provides services to people with disabilities and others who face challenges to finding employment through the sale of donations and gently used goods. The revenue generated from the sale of donated goods funds our job training programs. This entrepreneurial model is what makes Goodwill unique and is ultimately what makes it successful for the people it serves.

What is the role of a social enterprise?

Social enterprise means many things today. I see social enterprise as meaning economic development through job creation and entrepreneurial ventures that improve the quality of life for the local work force. Goodwill does this by offering training programs and employment to people who face significant challenges in finding employment - people with disabilities and disadvantages. We offer them opportunities to be part of the work force, to know the dignity of work and to contribute back to their communities. It is through Goodwill’s social enterprise model that we are able to offer the kinds of programs that provide economic development opportunities to local communities.

The concept of corporate social responsibility (CSR) has existed for more than 50 years. Why has it become such a hot topic for conglomerates?

Today, perhaps more than ever before, we are seeing companies wanting to give back to their communities. Through the tenets of CSR, these companies can give back in a way that’s meaningful to them, their consumers and stakeholders, and the broader community.

Was there a pivoting event or reason why you became interested in social enterprises?

Throughout my career, I always knew that I would be engaged in working in social enterprise and the economic development of communities and people facing employment barriers. I didn’t know what role it would take until the opportunity to work as the president and CEO for National Industries for the Blind came to me.

It was a unique opportunity to go into a social enterprise business model that had a positive impact on the lives of people who are blind. As a blind person, that gave me an opportunity to be a direct impact player for people who are blind in the United States. Moving to Goodwill was really a no-brainer because Goodwill is such an awesome brand. It was really a wonderful opportunity to serve a broader population and to have the potential to affect a positive impact on the world.

As a successful CEO, what kind of advice would you give to Korean social enterprise entrepreneurs?

I think there are two elements. In the world of human services through a social enterprise model, I think keeping focused on the market and understanding your customers, stakeholders and communities is the No. 1 priority for those who want to ensure that they’re striking the right balance. Secondly, it is important to optimize shareholder value of a strong CSR platform.

What expertise did you bring from your role as CEO of an AT&T subsidiary that especially applies to social enterprises?

The key learning experience from my AT&T career was the importance of meeting stakeholder needs. That is 100 percent applicable in the social enterprise sphere.

Do you still face any difficulties from your visual impairment while doing business and meeting people as a CEO?

Like anyone, I face occasional obstacles that require assistance from other resources and team members. I think any good leader knows when to recognize when he or she needs to ask for support and assistance for their leadership function to be fulfilled.

What kind of attitude or motto do you use to overcome stereotypes?

A positive mindset and a commitment to perseverance are key to a person’s success in overcoming any personal or professional challenge in life.