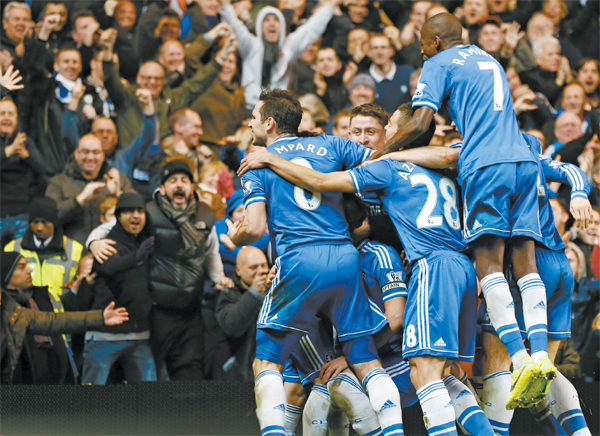 Chelsea players celebrate with their captain, John Terry, obscured, after he scored against Southampton in London on Sunday. [AP/NEWSIS]

Chelsea and Manchester City offered compelling evidence that they will lead the pursuit of leader Arsenal and champion Manchester United lost further ground on a Sunday that brought the third managerial casualty of the Premier League season.

Jose Mourinho’s Chelsea recovered from conceding a goal after 13 seconds at home to Southampton, scoring three times in the second half to win, 3-1, and close the gap on Arsenal to four points with a third of the season gone.

Wayne Rooney equalized twice for United in a 2-2 draw at Tottenham Hotspur, which left them nine points off the pace and Liverpool, which began the day in second, endured a miserable afternoon, going down, 3-1, at Hull City and hearing that striker Daniel Sturridge will be out for about eight weeks.

Struggling Fulham predictably sacked Martin Jol and Tottenham Manager Andre Villas-Boas, himself in the media spotlight after his team’s faltering form, showed the strain with a rant at his post-match news conference.

For the third time this season in the top flight a goal went in after 13 seconds, with Jay Rodriguez taking advantage of a Michael Essien error to give Southampton a shock lead at Chelsea.

There was little evidence in the opening half that Chelsea could avoid a first-ever home league defeat under Mourinho, but they overwhelmed high-flying Southampton after the break.

Defender Gary Cahill equalized at 55 minutes after John Terry’s header had been diverted against the post.

Seven minutes later, Terry celebrated his 400th Premier League appearance with a towering header before striker Demba Ba rounded off the victory with a late third.

City was not quite as rampant as it was in a 7-0 win over Norwich and a 6-0 drubbing of Tottenham last week, but it was too strong for a Swansea side missing leading strikers Michu and Wilfried Bony.

Alvaro Negredo curled in an eighth-minute free kick to give City the lead, although they had to wait until the second half to secure the points through Samir Nasri’s brace.

City’s task is to emulate its home form on the road, where they have been woeful, starting at West Bromwich Albion on Wednesday when Chelsea goes to Sunderland and Arsenal hosts Hull.

Under pressure, Spurs boss Villas-Boas accused reporters of having an agenda after his side’s draw with United, a verbal spat that overshadowed an improved showing by his side after its humiliation at Man City.

Kyle Walker put the Spurs in front after 18 minutes with a free kick that went under United’s four-man wall, but Rooney showcased his poacher’s instinct to level in the 32nd minute after a dreadful mistake by Walker.

Sandro’s thunderbolt restored Tottenham’s lead after the break but when Hugo Lloris was adjudged to have brought down Danny Welbeck in the area, Rooney strode up to thump his side level with his eighth league goal of the campaign. Reuters