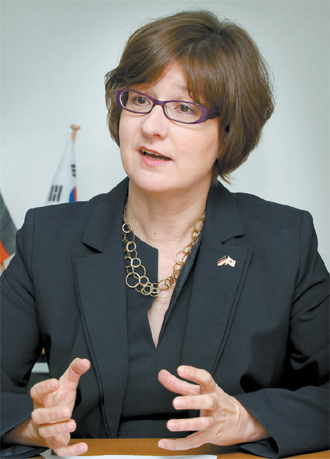 Providing small and midsize enterprises with good information on foreign markets is an important policy that should not be overlooked by the Korean government, according to Barbara Zollmann, secretary general at the Korean-German Chamber of Commerce and Industry (KGCCI).

In an interview with the Korea JoongAng Daily yesterday, Zollmann said that Korean SMEs are highly dependent on a few large companies to buy their products. Putting a wider focus on overseas markets can help them grow to eventually become what is known as “hidden champions” of an economy - small but strong businesses.

“There are certain policy approaches that could help the situation for Korean SMEs, which are at this point highly dependent on just a few big Korean companies,” Zollmann said. “A larger focus on foreign markets for Korean SMEs could help break this dependency on business with the conglomerates.”

Zollmann, who joined the chamber in March, gave an example of her own country, where the government has taken various policy approaches to support SMEs so that they’re able to develop their exports by providing information on foreign markets, assistance with market entry and also help with language and inter-cultural difficulties. In Korea, various surveys have shown that one of the big challenges SMEs face when expanding their businesses overseas is their lack of information on export markets.

Other policy efforts by the German government that Zollmann noted include giving SMEs access to resources such as research and development, capital and highly-skilled labor to develop specialized, sought-after products with unique selling points while also creating a favorable business environment for SMEs in terms of taxation.

Based on such policies, Germany has developed its own hidden champions. Zollmann, for example, pointed to Manfred Bogdahn, a company that invented the retractable dog leash about 40 years ago.

“It still produces in Germany and holds a global market share of 70 percent,” Zollmann said. “Although not highly visible, such producers are often highly innovative and set global trends in their respective sectors.”

Korea is trying to bring some balance to the economic contributions made by large, small and midsize companies for more sustainable growth.

“When you look into the history, it was the big conglomerates that were built in order to boost the Korean economy,” Zollmann said.

“At the time it was so helpful to have them and they helped Korea to grow, but now we’re going into a different phase of the Korean business cycle - to go away from the dependence [on large companies], because if one conglomerate fails the Korean economy will be hurt significantly.”

The transition, however, will not happen overnight.

“It is important to recognize that this specific feature of the German economy - German Mittelstand [SMEs] - has been cultivated over hundreds of years and has its roots in medieval small-scale artisan manufacturers competing with each other,” Zollmann said. “Therefore it takes time to develop an SME culture such as the German one where SMEs, mostly family-owned businesses, dominate the market and develop high-tech products that are sold all over the world.”

Zollmann added that each country needs to find the approach that suits its own “cultural DNA.”

“German SME policies might represent something comparable to what President Park Geun-hye intends to achieve with the concept of a creative economy for Korean businesses - a strong, innovative, broad number of Korean business that will take Korea’s economic success on the global stage to the next level,” Zollmann said.

“It is no exaggeration to say that Korea and Germany are connected through a special bond, not only due to similar historic experiences such as the painful division of the country or rapid economic growth from dire poverty, but also due to strong economic ties,” Zollmann said.

“The development of trade ties between Korea and Germany is closely linked with Korea’s economic development,” Zollmann said.

She mentioned how until the 1960s Korea exported mainly labor-intensive products like wigs and textiles, and since then Korea has started exporting more capital-intensive goods.

“Korea has [now] become a main supplier of high-end electronic goods such as smartphones and a variety of other advanced products in recent years,” she said.

“Furthermore, a rising living standard in Korea has led to an increased demand for German luxury goods such as cars.”

Based on increasing business opportunities in Korea, many German companies have brought large investments to the Korean market. According to Zollmann, recent examples include BMW, which is building a test driving center in Incheon for $62 million, the new Siemens Asia energy headquarters in Seoul, providing up to 500 high-quality jobs, or Linde Korea’s Giheung plant capable of producing high purity industrial gases for $180 million in 2011.

Korean companies have also found their way into Germany and Europe.