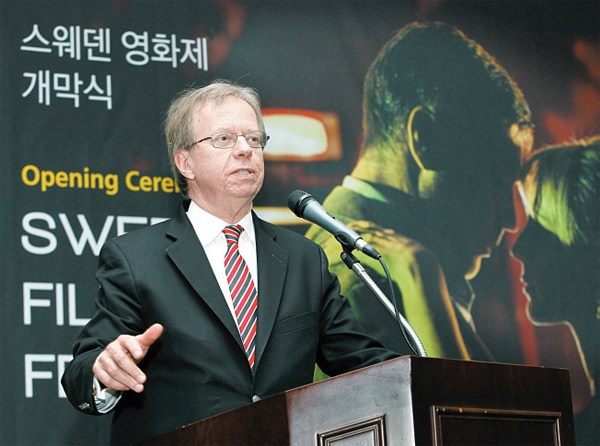 As a good-looking, humorous and popular politician, David Holst was a strong candidate to be the next Swedish Prime Minister. But, after suffering an unexpected defeat, he sinks into depression.

One day, the married politician falls in love with a man - from the opposing political party - and has to decide whether to give up his career, his marriage and shock his religious parents because of love.

That is the plot of a Swedish feature film titled “Four More Years,” which was part of last month’s third Swedish Film Festival held in Seoul and Busan by the Swedish Embassy. Its aim was to give an insightful glimpse into the life and culture of the northern European country to Korean moviegoers.

“This year, we are happy to present a new selection of seven feature films, a wider selection of feature films in terms of themes and styles,” Lars Danielsson, Sweden’s ambassador to Korea, said in his speech at the opening ceremony of the festival held at Ewha Womans University on Nov. 21. “It will introduce you into a wide variety of Swedish film-making today.

“We have made it a special event, given the fact that this film festival is taking place in the Ewha Womans University,” he said. “We have tried to put a particular emphasis on the films where women are at the center. You will find that in most of movies, you will have women who are directors, producers, or authors.”

Although Swedish films are known to be serious and dark, the ambassador said the festival also included some comedies.

“One comment we have about Swedish films is why all Swedish films so sad, so dark and so gray,” he said. “I guess that reflects the Swedish mood sometimes.

“But this time we presented two Swedish comedies, such as the movie ‘Four More Years,’?” he said. “So this will be a big revelation in the Swedish film festival - Swedish actually have a sense of humor!

“We also like to show the trend of documentaries, which are more and more important in the Swedish film-making industry,” the ambassador said.

“It’s a romantic comedy that is taking place in a political environment,” Magnusson said in her speech. “It’s a funny and sad story about a complicated love, about a man who thinks he knows who he is but he actually has no idea.”

Another director, Simon Kaijser da Silva, said it is a “preconception” that all Swedish movies are dark and gloomy.

“Most of my works are known as dark, but I also have made comedies,” he said. “Actually, the most popular movies in Sweden are comedies. It’s sort of a preconception that Swedish movies are dark, and the prejudice is possibly because some dark Swedish movies stand out internationally, while comedies can be found elsewhere.”