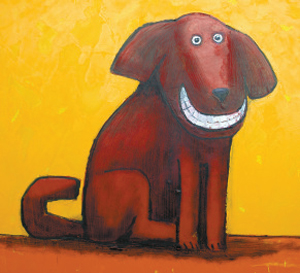 In response to a growing interest in fresh paintings and installations, artists from around the world have slowly made their way to Korea over the years to exhibit their work.

But for many locals, one painter in particular may come from rather unfamiliar country to the Korean audience.

Alexander Antadze, from Georgia, came to Korea at the invitation of the Embassy of Georgia. He is the first artist from his home country to hold an exhibition here.

Many of his paintings - presented under the theme “Smile Village” - feature playfully drawn animals from around the capital Tbilisi, and instantly convey a sense of warmth and playfulness. The subjects, with their often cheerful expressions and goofy faces, represent the small joys of daily life.

In one work a cow smiles, with its exaggerated white teeth bared. And in another a horse with big circular eyes stares straight at viewers. Still, in a third, two dogs sitting side by side are overcome with fits of laughter.

Antadze, born in 1972, studied fine arts at Georgia’s Tbilisi State Academy of Arts. He held his first solo exhibition in 2003 in London, and for the past 10 years he has been gradually building his profile around Europe, showing his works in England, France, the Netherlands, Switzerland, Russia and his native country.

Antadze’s work was previously shown in central Seoul at the Gallery Sun Contemporary earlier this year.

His current exhibition starts Dec. 6 and runs to Jan. 8, 2014, at the Lotte Gallery in Anyang, Gyeonggi.

Afterward, it will move to Gwangju, Jeolla, where it will run from Jan. 24 through Feb. 19.