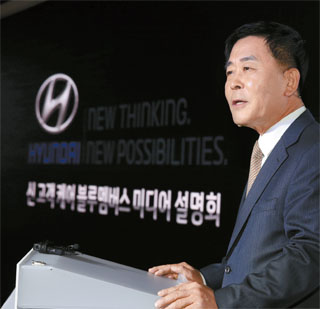 Hyundai Motor yesterday announced a new plan to enhance customer service in a bid to rebound from struggling domestic sales.

The nation’s largest automaker has expanded the Bluemembers program used since 2007.

“Hyundai Motor has been trying to get closer to our customers through innovation and change, and Bluemembers is one of our efforts,” said Kwak Jin, senior vice president at Hyundai’s sales promotion division. “We will transform car-care service to life-care service.”

Hyundai’s domestic sales this year are 590,705 units, down 2.3 percent from a year ago. In November, they slipped nearly 12 percent year-on-year.

Hyundai first said it would revise its Bluemembers point program where customers use points like cash in selected stores.

Previously, Hyundai gave 150,000 points maximum to customers, classifying them only as “newly purchased” and “repurchased.” However, the revised system calculates points based on the number of purchases.

These points can be used like cash for up to a maximum of 2 million. Points also can be transferred to family members.

“Our revised plan came out after we benchmarked what other foreign carmakers do and conducted research to examine the market,” said Kim Hyun-soo, director of Hyundai’s customer satisfaction management group. “Just like other foreign countries, corporate customers are increasing and we are trying to diversify the use of our program and develop a customer-centralized program.”

Hyundai said its Bluemembers program was originally offered to those who bought Hyundai cars, but it will now be expanded to “those who drive Hyundai cars,” meaning that it will embrace corporate customers and lease and rental companies.

The company also revealed that it is continuing to expand service shops and showrooms. Hyundai said it plans to establish 1,424 service centers by 2016, with 1,113 completed so far. It wants to have 822 showrooms by 2016, including a flagship store at Dosan-daero in Sinsa-dong, southern Seoul, known as the “street for imported cars.”

“We are trying to let customers experience our brand identity, and our marketing is also focusing on relating with culture and arts programs,” said Kim Sang-dae, director at Hyundai’s domestic marketing group.

Hyundai said it previously spent about 80 billion won a year on its customer service operation. Under the revised plan, the cost will be double, but the company said it is a necessary investment to sustain its business.

With the enhanced customer service program, Hyundai added that it will also try to introduce new models based on current strong-selling models such as turbos and hybrids.

Hyundai officials said a hybrid Grandeur (known as Azera overseas) could be released as soon as the end on December.