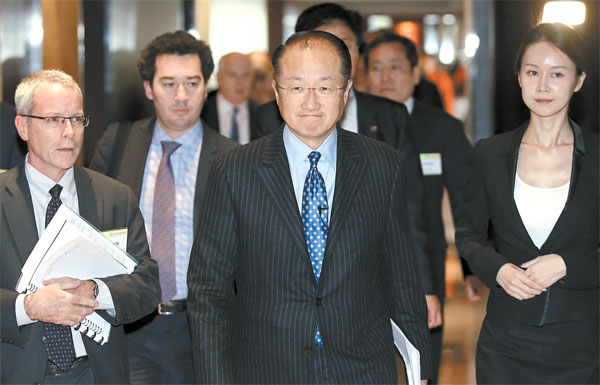 Jim Yong Kim, president of the World Bank Group, urged Korean businesses to be more aggressive in their engagement with the developing world, especially Africa.

“There is an underappreciation of the opportunity in Africa among Korean companies,” Kim said yesterday at a press conference at the Grand Hyatt Seoul in Hannam-dong, central Seoul. “We wanted to make it clear that there are great opportunities.”

Kim, a Korean-American born in Seoul, is in town for three days to attend the opening of the new World Bank Group offices in Songdo, Incheon, today. It is his second visit since he took his post in July 2012.

“The purpose of my visit is [also] to really focus on some countries that people might not expect with real opportunities for Korean business,” he said. “In this case, I’m talking mostly about Africa. I also came to provide an update on Myanmar, both because we move so quickly and it’s an area of great interest for Korea, but also as an example of what might happen if there were an opening in North Korea.”

When it comes to new business opportunities in Africa, the president noted, “Korea is a bit behind.” Kim mentioned how China, for example, has been very “aggressive” in investing in the region.

“This [Africa] is an area where there is enormous opportunity,” he said, “not only for strong economic returns but also for having an impact in the developing world.”

Earlier in the day, Kim met with Korean businesses at a luncheon meeting titled “World Bank Group and Korea: A Dynamic Partnership in New Frontiers - Africa.” It was hosted by the Korea Chamber of Commerce and Industry, a business lobbying group. Among the participants were Hyun Jeong-eun, chairwoman of Hyundai Group, and Lee Seung-han, chairman of Homeplus. Ambassadors from countries in Africa also attended.

Kim also spoke about how the World Bank Group is willing to provide assistance to North Korea only if it joins the World Bank and International Monetary Fund.

“Unfortunately, until they become full members of the World Bank and the IMF, there isn’t much that we can do,” said Kim.

Kim also said, “Once there is a political opening, organizations like the World Bank and all of our partners are ready to move right away.”

In the meantime, in his opening remarks at the press conference, Kim said there is much Korea can share.

“Korea is an exceptional example of an aid recipient-turned-donor, with GNI per capita increasing from $67 in the early 1950s - lower than many countries in Africa - to over $20,000 today,” Kim said. “Korea’s experience is very relevant. It is acting as a ‘bridge’ between developed and developing countries through the G-20. It is a strong supporter of the IDA [International Development Association], the Bank’s fund for the poorest, and it has been increasing its overseas development assistance overall at a time when many countries cannot.”

According to the World Bank Group, Korea’s official development assistance increased sixfold to $1.3 billion in the decade ending in 2011.