“If I were to grade myself as a curator, I’d say B for collection and B for research, but because I’ve held more than 100 exhibitions, I’d get an A for presenting,” said Heo Dong-hwa, 87, head curator of the Museum of Korean Embroidery.

“Each time we exhibited our collection abroad, I had this indescribable pride and often couldn’t find the words to speak. I’m a bit like that today. Our ancestors created such a wonderful culture, and I am just reaping the benefits of that. I’ll continue to publish information booklets to further develop the field,” said Heo on Nov. 20 upon receiving his honorary doctorate in art history at Myongji University in Seodaemun District, central Seoul.

At first, Heo’s credentials strikes you as a bit odd. After graduating from the Korea Military Academy and fighting in the 1950-53 Korean War, Heo was given the Order of Military Merit. Then, from the 1960s to the 1970s, Heo worked as an auditor at the Korea Electric Power Corporation, which was notoriously called the “Abode of Demons.” After he left Kepco, Heo became a manager at an embroidery research institute.

Q.How does an army lieutenant-turned-Kepco auditor turn to embroidery?

A.Everyone says I’m part woman, part man [laughter]. I started collecting pottery, but because I had no money, I’d collect only cracked or broken ones. Then, in the ’60s, I went to Insa-dong and saw a foreigner buying a folding screen with flowers and birds on it. Even as someone totally removed from that world, I could tell it was an exceptional piece. I was compelled then and there to buy up all of the traditional artworks so that none would be taken abroad. 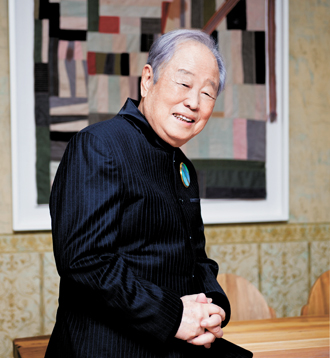 What was your first embroidery piece?

I have a friend who does folk painting who told me that if I went to Insa-dong and brought him back royal embroidery that he’d give me something of his. That’s how it began.

How do you pick valuable pieces?

You shouldn’t get too dressed up when you go shopping. I used to walk around like a hobo around Insa-dong and Janganpyeong. My nickname was “junk man” and sometimes people would throw me 500 won [$0.47] pieces because they thought I was a beggar. And, most importantly, when you find something valuable, don’t haggle. If you give them more than they ask for, they will trust you, and if a real gem comes along you’ll be notified first.
You also own National Treasure No. 653 - Folding Screen Embroidered with Natural Scene of Four Seasons from the Goryeo Dynasty. How did you get a hold of that?

It was initially sold to a foreigner. At the time, I was on the committee at the Cultural Heritage Administration. I said that it wasn’t going anywhere as long as I was around.

A few days later, I was told that the buyer withdrew, and I was asked if I was interested in buying it. This particular screen is significant because it showed that bonsai trees were already around in that era. It shows that despite Japan’s claim that the tree is exclusive to its culture, that was not the case.
What happens if you miss out on what you want to buy?

I get sick. I can’t forget it. I’ve failed many times, too, because of greed. Once, I bought this 6-panel-wide folding screen. But then the seller asked me for more money. I automatically thought, “Who’d buy this apart from me?” and walked away. After that, I never saw it again. I think it was sold off to Japan.

Although cheaper than other antiques, I’d imagine that to own 2,000 embroidery works, 1,000 bojagi [traditional wrapping cloths] is by no means a cheap hobby.

People think I’m rich and sort of a go-getter. But it’s not like that. I have a lot of people helping me out, and at times I buy pieces on credit. I guess I owe it all to marrying a woman who finished at the top of her class at Seoul National University’s dentistry school. At first, she was against me buying these works, but when invitations from abroad kept coming, I think she found some fun in it herself.

There have been 54 exhibitions of Heo’s Korean embroidery and cloths in the last 35 years. More than 7 million people have attended, Heo said. The number is staggering, given that it is a private collection. The cost of such showings equate to 25 billion won. Heo said that all of this was possible because 99 percent of the showings were by invitation. 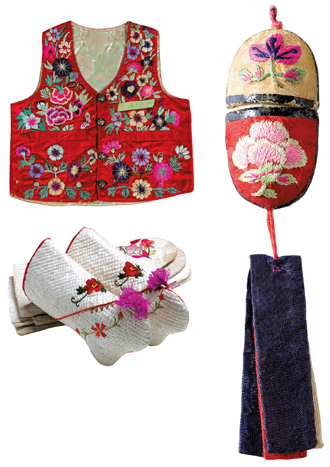 Heo Dong-hwa’s 55th exhibition abroad will be at the Korea Museum in Kyoto next month.

How did you become popular abroad?

One day, Choi Soon-woo, curator of the National Museum of Korea, paid me a visit. He doesn’t talk much, but when he came over he wouldn’t stop, exclaiming “Oh my!” and “This still exists?” as he looked over the collection. After that, I was able to hold my first exhibition at the National Museum in June 1978. The next year, I held my first exhibition abroad at the Korean culture center in Tokyo.
Did you contact the foreign museums?

Exhibitions abroad take place when the other party values your collection [and contacts you]. But once you get their validation, then the museum folks talk among themselves and you get asked by others. European museums in particular were intrigued. The Ashmolean in Oxford, England, was phenomenal because the turnout was 300,000 when the population of the city was just 200,000. Apparently one student saw it 10 times.

Which was the most memorable foreign exhibition?

When the Museum of Asian Arts opened up in Nice, France, in 1999, they asked us to exhibit at the opening. They even invited soprano Sumi Jo and held a party at the botanical garden. Then there was the Sydney Powerhouse Museum. Due to popular demand, the exhibit ran for three additional months [six months total]. The curator said that because of the influence [of the exhibit] “afterward, Australian designs will never be the same again.”

What do you think is so appealing about traditional cloths to foreigners?

At first they thought the cloths were scarves. Then they were shocked to find out that they weren’t, and then they were shocked at the colors and the fabric. They view our boudoir arts as contemporary art. Some say that it surpasses the abstract paintings of [Piet] Mondrian and [Paul] Klee.

Why are the exhibitions abroad so important?

At first, I thought you could only make it big in Korea if you were a success abroad first. It was a case of toadyism, but if you look at the results, I think I was right. In Korea, embroidery and cloths only took off in the last 10 to 20 years, and this was no doubt because it was so well received abroad.

There is no race that loved embroidery as ours did. When the nation decreed [during the Unified Silla Period from 809 to 826 AD] that it was too dressy and banned it, people began embroidering on the inside of their clothes.

There are some who think that patchwork is not all that exciting.

There are so many who still don’t understand that a subculture like this is so valuable. The Confucian way of looking at things, which is very much from a male perspective, still prevails. I guess, though, if you place embroidery and cloths side by side, there is more cultural significance in the embroidery. Cloths are less popular now, but I can still be credited for bringing them into the spotlight.

What value did you see in the cloth?

The way Koreans looks at cloth is very sentimental. It’s often called the “seed of tears.” It embodies the unfortunate lives endured by women. But foreigners don’t really get that. They think, “How can people who lived in such darkness have created such beautiful things?” So perhaps now we should call them “seed of happiness.”

What exhibitions are you planning?

From next month to March, our 55th exhibition abroad will take place at the Korea Museum in Kyoto. This time, we are adding additional information about pockets. In Japan, there are more than 100,000 embroidery and cloth work devotees. Each time we show there, they take an active interest. That’s why the museum has asked us for the third time.

Our curator recently sent an information packet to the Louvre. Some may think it’s being a bit ambitious, but we don’t think so. We are proud of our achievements to date.