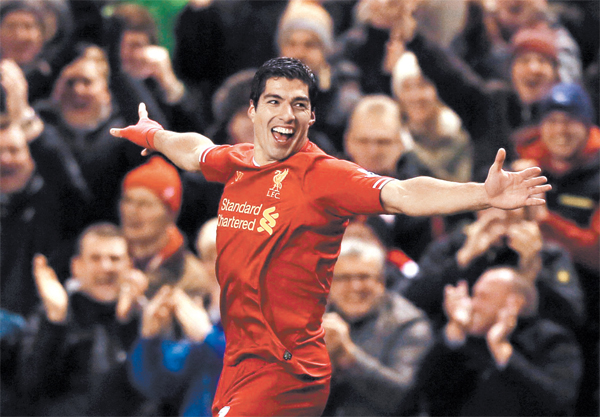 Liverpool’s Luis Suarez showed his devastating ability to act as a one-man wrecking ball with four goals in a 5-1 demolition of Norwich City as Arsenal’s forgotten man, Nicklas Bendtner, jogged a few memories in the Premier League on Wednesday.

Suarez delivered a dazzling collection of goal-of-the-season contenders at Anfield, and Bendtner scored two minutes into his first start in more than two years to help the Premier League leaders beat Hull City, 2-0.

Second-place Chelsea and Manchester City in third came through tight tussles to beat Sunderland and West Bromwich Albion, but champion Manchester United lost, 1-0, at home to Everton to slip 12 points behind the leaders.

While the pressure on United manager David Moyes increased, Tottenham Hotspur eased the stress on boss Andre Villas-Boas by coming from behind to beat Fulham, 2-1, in Rene Meulensteen’s first game as manager.

Arsenal, with 34 points, stayed four points clear of Chelsea at the top of the table, with Manchester City two adrift in third and Liverpool a point further back in fourth, ahead of Everton on goal difference.

Tottenham moved up to sixth on 24 and Manchester United dropped to ninth.

Suarez must wish he could play Norwich every week, a team against whom he has now scored 11 goals in his last four Premier League games.

He grabbed a first-half hat-trick, including two genuine contenders for goal of the season.

The first, a stunning volley into the top corner from almost 40 meters (43.7 yards), was followed by a more modest poacher’s effort, before he wowed the home fans further by juggling the ball and cracking in an unstoppable shot from distance. He completed his personal show-reel with another moment of quality, bending a 25-meter free kick into the top corner, before Norwich pulled a goal back through Bradley Johnson and Raheem Sterling rounded off the scoring for the hosts.

Arsenal’s Bendtner has been little more than a casual observer in their superb start to the season, yet with the transfer window looming, he delivered a timely reminder to Arsene Wenger that he could yet be an able deputy to Olivier Giroud.

Having not started a game since March 2011, Bendtner took two minutes to etch his name on the scoresheet, rising to meet a Carl Jenkinson cross and slamming a powerful header into the net from four meters out.

Moyes was given a hostile reception from Everton’s traveling fans, but the mood turned to jubilation for those clad in blue as left back Bryan Oviedo converted Romelu Lukaku’s cross from the right.

After Moyes had failed to ever get a positive result at Old Trafford, new boss Roberto Martinez picked up three points at the first time of asking, the Toffees’ first win at the ground since 1992.

“I’m very disappointed. We needed a bit of good fortune and we didn’t get it. Everton kept at it and showed us what a good team they are,” Moyes said.

There was also disappointment for Sunderland Manager Gus Poyet as the former Chelsea midfielder came unstuck against his old club.

Eden Hazard starred for Chelsea by scoring twice as they edged a seven-goal encounter, 4-3, with Frank Lampard and a Phil Bardsley own goal the other names on the scoresheet for the visitors. Reuters