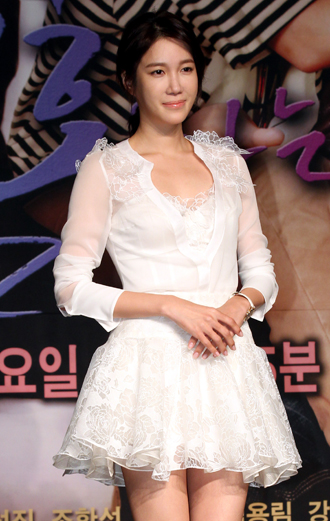 Cast members of the SBS drama “Thrice Married Woman” gathered to share what it has been like to film the show.

Actress E Jiah, who plays the lead character, Oh Eun-su, says that the lines written in the scripts were hard to digest in the beginning, but she is getting used to it.

The drama is written by veteran scriptwriter Kim Su-hyun, whose other scripts include the recent “Childless Comfort,” on cable channel JTBC.

“As Kim’s writing is very blunt, it was hard in the beginning, but now I speak in that style even in my everyday life,” the actress said in Goyang, Gyeonggi.

E Jiah plays a full-time homemaker who got married for the second time in the drama, which started its run in November.

She also apologized to other actors and actresses for a controversy over her appearance.

Many netizens have pointed out the actress looks different from before.

“I think because I have come back [on TV] for the first time in a long time, many were very attentive to get a better look,” she said.

“I’m sorry for the other cast members and also felt sad that they focused more on such things than acting skills.”