Park and Biden are hand in hand

Park and Biden are hand in hand 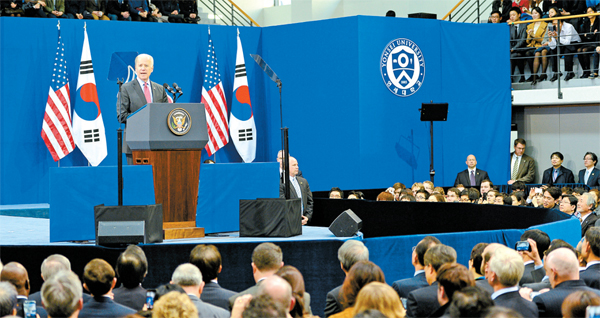 U.S. Vice President Joe Biden delivers a speech to over 1,300 Korean students and other guests at Yonsei University in Seoul yesterday on the United States’ Northeast Asia policy in which he said, “President [Barack] Obama is absolutely committed to rebalance” to the Asia-Pacific region. [NEWSIS]

Seoul is finalizing its plan to expand its own ADIZ, originally drawn up over six decades ago by the U.S. during the 1950-53 Korean War, to respond to Beijing’s more aggressive posture.

The talks yesterday provided an opportunity to relay Korea’s position to the United States through Biden.

It was not clear if Washington has approved of Korea’s plan.

Biden is on a week-long Asia tour intended to reconfirm Washington’s “pivot” to the Asia-Pacific region from the Middle East and Afghanistan. He has ended up mediating the tension in the region after Beijing’s unilateral decision on Nov. 23 to draw up an East China Sea air defense identification zone that overlaps the zones of Seoul and Tokyo.

As he reaffirmed Washington’s commitment to a “rebalancing” toward Asia, Biden said, “The United States never says anything it does not do,” adding that it’s “never been a good bet to bet against America.”

Park and Biden displayed a close bond by walking into talks at the Blue House hand in hand and smiling.

“At a time when we have recently been seeing growing volatility and tensions in Northeast Asia,” said Park, “it is very helpful for peace in Northeast Asia to have a vice president with such profound insight into foreign affairs travel to this region.”

Biden is the highest level U.S. official to visit Seoul since the inauguration of Park last February. He also presided over the U.S. Congress when Park gave a speech to the combined houses on a state visit to Washington in May. Biden’s talk with Park was originally slated for 30 minutes, but they spent over an hour together.

Biden arrived in Seoul late Thursday after stopping to speak to Japanese Prime Minister Shinzo Abe in Tokyo and Chinese President Xi Jinping in Beijing on a week-long tour.

Minister of Foreign Affairs Yun Byung-se, who attended the talks between Biden and Park, said afterward, “President Park explained our position regarding the air defense identification zone, and Vice President Biden weighed in on President Park’s explanation and Korea’s position.”

He added that Biden “appreciated” Korea’s explanation of its plans, without saying if the United States supported Korea’s plans to expand its ADIZ. “Both sides agreed to close cooperation on this issue in the future,” Yun said.

Park’s National Security Chief Kim Jang-soo held a national security policy meeting of foreign affairs and security officials to finalize a Korean ADIZ that includes Ieodo, a submerged reef in the East China Sea, and other remote islands in the region, Hong Island and Mara Island.

Ieodo is located in the overlapping exclusive economic zones (EEZs) of Seoul and Beijing but is effectively controlled by Korea, which built a maritime research station atop the reef. The decision on an expanded Korean ADIZ is expected to be announced in the next few days.

However, expanding Korea’s ADIZ might be met with hostility from Beijing and Tokyo, who have discussed expanding their ADIZs further.

After meeting with Park, Biden gave a speech at Yonsei University on the United States’ Northeast Asia policy to over 1,300 Korean students and other guests in which he said, “President [Barack] Obama is absolutely committed to rebalance” to the Asia-Pacific region.

Yonsei was the first school he visited on his three-country Asia tour.

Beijing’s sudden announcement of an air defense identification zone “has created considerable apprehension across the region,” Biden said in the speech. “But I was absolutely clear on behalf of my president: We do not recognize the zone. It would have no effect on American operations. Just ask my general. None. Zero.” 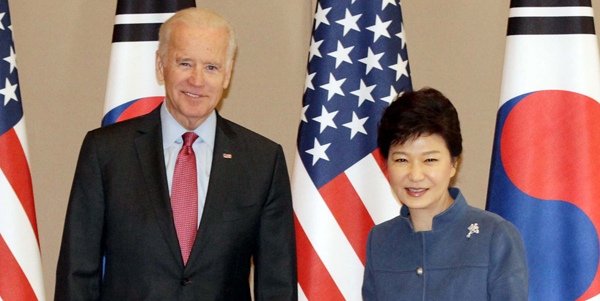 The United States sent two B-52 bombers and other military planes through the area to present a challenge to Beijing’s unilateral announcement of the new zone.

Biden said in his conversations in Beijing that “they were very direct,” and that he too “was very direct” about Washington’s position on the issue.

“I’ve also made it clear we expect China not to take actions that increases tensions and the risk of escalation.”

Biden said he made “crystal clear” the U.S. commitment to its allies, Korea and Japan.

Biden was also expected to encourage Seoul to mend ties with Tokyo in this visit.

“The entire region would be more stable and more secure if the leading democracies, Japan, South Korea and U.S., are able to improve their relations and cooperation with one another.”

“We’re also working to get our relationships with China right, with the right standards,” he added.

He said Washington “rejects” the notion that competition between the two countries is leading to inevitable conflict.

Biden said, however, that all the countries he visited agree on the denuclearization of North Korea.