Illegal SD cards lead to billions of won in losses

Illegal SD cards lead to billions of won in losses 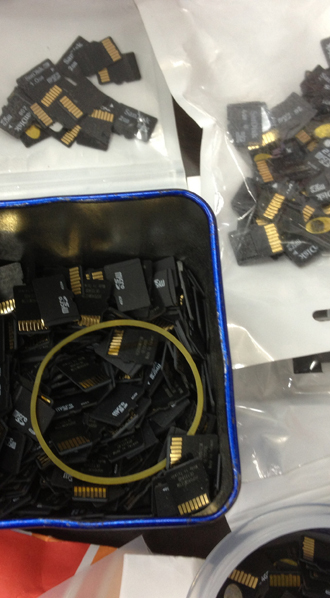 On a recent morning in Jongno District, central Seoul, eight special judicial police officers under the Ministry of Culture, Sports and Tourism, and 12 employees of the Copyright Protection Center, stepped onto one of the city’s main commercial drags.

One of the stores - which other vendors alleged disseminated the largest number of SD cards and audio players - had about 1,000 audio players in total.

Within 10 minutes of entering the shop, investigators found 16 boxes, filled with 100 audio players each, which were packed and ready to be shipped to retailers in other cities.

They also uncovered about 5,000 SD cards that contained illegally downloaded music - a total of about 5 billion won ($47 million) worth of copyrighted material.

Additionally, in storage on the second floor, authorities found thousands of song books, in which customers can choose songs for download.

When investigator Lee Wan-kyu asked the shop’s owner where the illegal SD cards were made, the man claimed he bought them at another store. When Lee told him they would confiscate his transaction information, the shop owner insisted that no such records existed.

But sure enough, the team found that the confiscated SD cards contained thousands of illegally downloaded files, proving the vendor had been involved in their production.

That means, with each SD card containing a minimum of 2,000 songs each, as many as 17 million downloaded songs could have been illegally distributed - which amounts to at least an 8.5 billion won loss for the music industry.

Since July, there have been 387 crackdowns in Anyang, Gyeonggi. And meanwhile, the team has found 2,319 SD cards with more than 2.5 million illegally downloaded songs.

“Two million SD cards containing illegally downloaded songs that are sold with the audio player amounts to an estimated loss of about 80 billion won,” said a representative of the Music Industry Association of Korea (MIAK).

“[Songs by] famous Trot singers Jang Yoon-jung and Nam Jin are often featured on SD cards,” the representative added. “Especially their duet song, ‘I Like You,’ which was released in 2009.”

Trot, a genre of Korean music, is especially popular among seniors. And in fact, according to authorities, illegal SD cards are, too.

The high-capacity SD card eventually replaced cassette tapes and CDs as the preferred vehicle for illegally copied songs. So as sales of illegal SD cards and audio players increased this year, the products evolved to add more features.

“Those above 60 prefer saving Trot singers’ music videos on their SD cards,” Lee acknowledged, “because they often have trouble finding videos on the Internet.”

The illegal memory cards cost about 3,000 won each. With the audio player, the cost increases to about 25,000 won minimum. For ones with more advanced features, like higher volume levels or video players, the price increases to as much as 70,000 won.

Selling illegally downloaded songs on SD cards is a continuous violation of copyright laws, and authorities have acknowledged the need to step up enforcement.

“Recent violations have expanded from music to videos,” said Kim Young-yun, the copyright protection deputy director of the Ministry of Culture, Sports and Tourism. “We are going to focus our investigation on finding the producers of these SD cards.”