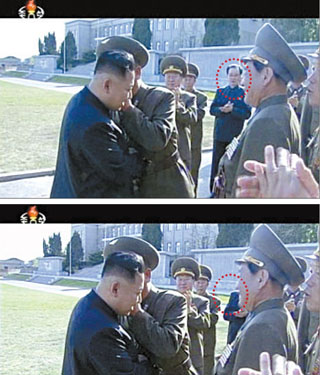 Jang Song-thaek was seen in documentary “Great Comrade” aired on Oct. 7, top. But Jang’s image was not seen in the Dec. 7 version, above. [Unification Ministry]

North Korea deleted from its state-produced documentary all scenes featuring Jang Song-thaek, the uncle of leader Kim Jong-un. Analysts in Seoul say this is solid evidence of the alleged purge of the young leader’s once-powerful protector.

The documentary was first broadcast on Oct. 7, and the regime has reportedly aired it ten times since then, including on Saturday.

However, the incarnation that aired over the weekend was slightly different from previous versions. All the scenes in which Jang appeared were either taken out or replaced with completely different footage.

In one instance, Kim Jong-un walks with four military officials, including Jang on his left. However, in the latest version, the left side of the scene has obviously been edited so as to only reveal three of the officials.

The altered version of the documentary comes just four days after the National Intelligence Service, South Korea’s top spy agency, announced to reporters and lawmakers that Jang had most likely been purged, with two of his closest aides confirmed to have been publicly executed.

A South Korean government official told the JoongAng Ilbo that the deletion of material featuring Jang is crucial proof of his downfall. “This proves a far more serious and complete dismissal [of Jang] than we expected,” the official said.

In previous cases, other high-ranking officials have also vanished from the footage of several regime-produced documentaries.

Ri Yong-ho, the former chief of the general staff of the North Korean army whom North Korea’s state-run media officially reported was sacked in July, has been removed from all of the documentaries and news footage since then. And Pak Nam-ki, the former director of the Financial Planning Department of the ruling Workers’ Party who worked under Kim Jong-il, was also edited out of a documentary in March 2010. The scene in which he appeared with the late leader was replaced with a scene relating to beans. He has not appeared in any state-related media since.

At the time, the Japanese media of Mainichi Shimbun reported that Pak, one of the inner-most aides to the ex-leader, had been purged, citing sources in Beijing. He was reportedly dismissed because his plan for fourth-round currency reforms failed. According to North Korean defectors in the South, he was publicly executed by firing squad.

“So far, no one who was deleted from state media’s reports has reemerged in North Korea’s political arena,” an official of South Korea’s Ministry of Unification told the Korea JoongAng Daily. “The deletion of a figure from a documentary means that North Korea has confirmed Jang’s purge,” An Chan-il, a defector turned analyst, told the Korea JoongAng Daily. “It means Jang has been stripped of all posts for a grave crime, such as anti-party activities or treason.”