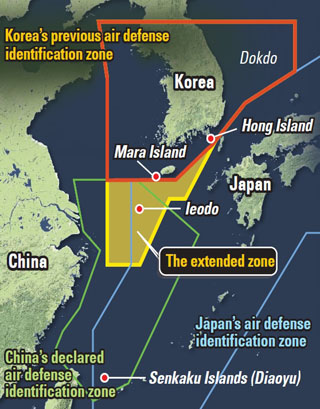 The Korean government yesterday announced its plans to expand its 62-year-old air defense identification zone (ADIZ), which overlaps with remote islands declared by China and Japan under similar zones.

The move, intended to counter Beijing’s unilateral declaration of a newly mapped East China Sea ADIZ on Nov. 23 that incorporates areas claimed by Korea and Japan, may only serve to further escalate tensions regarding air space in a region already riddled with territorial disputes.

Korea will expand the southern boundary of its ADIZ to incorporate waters 250 kilometers (155 miles) south of Ieodo, which will also coincide with its flight information region (FIR), a specific airspace set by the International Civil Aviation Organization in which flight information and alert services are provided. An ADIZ that is aligned with the FIR was considered most ideal in the planning process.

Kim Min-seok, a spokesman of the Ministry of National Defense, said that Korea consulted with the United States, China and Japan about its plans before making the announcement. 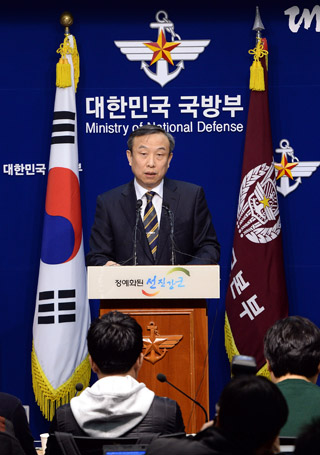 The KADIZ expansion is slated to take effect on Dec. 15, the Ministry of National Defense confirmed yesterday, adding that an additional seven days will be needed for preparations and to notify relevant authorities.

The expanded zone includes Ieodo, known internationally as Socotra Rock - which also falls within the ADIZ of Japan and China - but also the air space of nearby Mara Island and Hong Island, which was not previously included.

The United States conveyed general support for Korea’s decision yesterday, saying that it appreciates that Korea’s adjustment to its ADIZ is “in a manner consistent with international practice and respect for the freedom of over-flight and other internationally lawful uses of international airspace.”

“The government [of the Republic of Korea] has conferred with the United States in advance of their decision, including in the meeting between Vice President Biden and President Park in Seoul on Dec. 6,” the U.S. Department of State said in a statement yesterday in response to Korea’s announcement.

China had been criticized for unilaterally declaring its demarcation of an East China Sea ADIZ that overlaps with areas claimed by Tokyo and Seoul without prior consultation with its neighbors.

Korea’s approach, with prior consultations, “avoids confusion for, or threats to, civilian airlines,” Washington said. Korea postponed an announcement of its expanded ADIZ to report its plans to U.S. Vice President Joseph R. Biden Jr. on Friday during his three-day visit to Seoul.

Despite protests from Seoul, Tokyo and Washington, China has refused to retract its declaration. Major Korean and Japanese commercial carriers have been advised by the government since then not to report their flight plans to Chinese authorities before entering the airspace.

The Chinese and Japanese governments yesterday did not give an immediate official response to Korea’s announcement of its expanded ADIZ. However, China experts weighed in, saying that it is likely that Beijing will encourage dialogue to resolve the issue - a point China’s officials have emphasized since the declaration of the East China Sea ADIZ.

On Friday, Chinese Foreign Ministry spokesman Hong Lei said Korea’s expansion of its ADIZ should be in accordance “with international law and norms,” but said Beijing “is willing to maintain communications with South Korea on the basis of equality and mutual respect.”

Korea’s ADIZ was drawn up by the United States in March 1951. Its limit stopped south of Jeju Island, just short of incorporating other remote islands. Because the air defense zone was planned during the 1950-53 Korean War, its establishment was focused around the possibility of attacks from Chinese troops from the north.