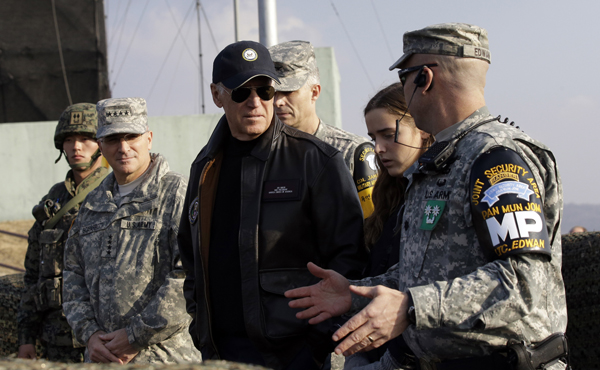 U.S. Vice President Joe Biden, center, is briefed by Lt. Col. Daniel Edwan, the commander of the JSA Security Battalion from Observation Post Ouellette during his tour of the demilitarized zone (DMZ), near the border village of Panmunjom, which has separated the two Koreas since the 1950-53 Korean War, Saturday. [AP/NEWSIS]

Concluding a whirlwind Asia tour, U.S. Vice President Joseph R. Biden Jr. on Saturday celebrated 60 years of alliance between Korea and the United States, visiting the Korean War Memorial, greeting soldiers from both countries and making a stop at the demilitarized zone.

Coinciding with the last day of his trip, North Korea released Merrill Newman, an 85-year-old American war veteran who had been held in captivity for more than a month.

Biden said the Communist state’s decision to release him was “a positive thing” - a rare praise of Pyongyang by the United States.

“The DPRK [Democratic People’s Republic of Korea] today released someone they should never have had in the first place,” Biden told reporters after he laid a wreath to honor fallen U.S. soldiers at the War Memorial of Korea in Yongsan District, central Seoul.

“I offered [Newman] a ride home on Air Force 2, but as he pointed out, there is a direct flight to San Francisco,” Biden continued. “I don’t blame him. I’d be on that flight, too.”

Newman opted to take a nearly 12-hour-long flight from China to San Francisco. He and his wife reside in Palo Alto, California. Biden acknowledged that he had “no direct role” in Newman’s release and had not communicated with Newman directly.

While much of his visit was spent alleviating regional tensions following China’s unilateral declaration of its new air defense identification zone (ADIZ), Biden emphasized that Washington, Seoul, Beijing and Tokyo remain firm in their commitment to the denuclearization of Pyongyang - one of the most important long-standing regional issues.

However, there were no updates on Korean-American tour operator Kenneth Bae, who was sentenced to 15 years of hard labor by North Korean authorities and who remains in captivity. “They have Mr. [Kenneth] Bae, who … should be released immediately,” Biden said.

Meanwhile, he acknowledged that it was “a great honor” to visit the war memorial, which pays tribute to “the memory of so many great Americans who gave their lives for the freedom of the Korean people.”

After meeting with U.S. and Korean soldiers at Yongsan Air Base, Biden arrived at the demilitarized zone (DMZ) via military helicopter. He previously visited the DMZ when he served as a U.S. senator. On a clear afternoon, Biden viewed North Korea through binoculars from Observation Post Ouellette, with the North Korean border just 25 meters (27 yards) away. He was accompanied by his granddaughter.

“Welcome to the edge of freedom,” a United Nations Command Security Battalion commander said to him.

“Good to be back,” Biden replied.

There are some 28,500 U.S. soldiers currently deployed in Korea. In a speech the previous day in front of a group of students at Yonsei University, Biden drove home the message of the U.S. commitment in Korea. “We are going nowhere,” he said.

Biden also touched upon North Korea in his talk, warning that the Communist state would “never achieve security and prosperity so long as it pursues nuclear weapons.”

“The U.S. will never accept the notion of a permanent division of the Korea Peninsula,” Biden continued. “We will never forget that Koreans are one people, equally deserving to be treated with dignity.”

He has also emphasized to President Park Geun-hye in talks on Friday the Obama administration’s sincerity in realizing a “rebalance of the Pacific basin,” with the United States placing full confidence in South Korea.

Biden returned home to Washington on Saturday after a three-day visit to Seoul.