Any job will do if it offers security

Any job will do if it offers security 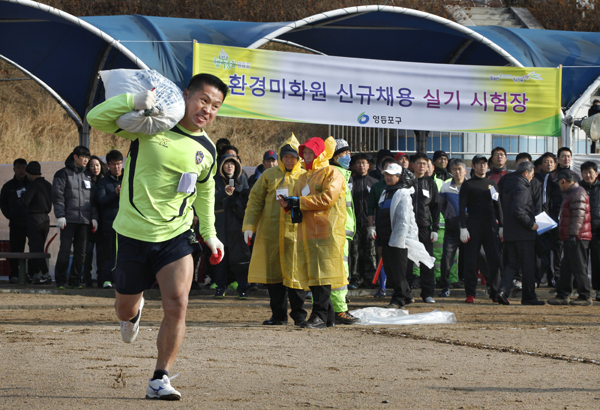 An applicant for a street-sweeper job takes part in a physical fitness test held by Yeongdeungpo District Office at Anyang Stream on Nov. 27. By Park Sang-moon

It was late in the morning Nov. 27 when the mercury dipped unseasonably below zero degrees Celsius (32 Fahrenheit), and most people in Seoul did their best to stay indoors.

But on the corner of a sports ground near Anyang Stream in western Seoul, a small army of men dressed in gym shorts and windbreakers went through determined warm-up exercises.

They were gathered to take a physical fitness test for district office positions that had opened up: as street sweepers.

According to the Yeongdeungpo District Office, the job ensures a retirement age of 60 - far older than in the private sector - an annual basic salary of 32 million won ($30,144) and some perks comparable to those of a level 9 civil servant.

A total of 83 applicants competed for five jobs, almost 17 applicants for each position. Some 60 of the applicants arrived at the sports ground hours early, clad in air-cushioned running shoes and stretchy sports outfits, in an effort to train ahead of the test and gain a slight edge over their competitors.

Today’s mission: running 50 meters (164 feet) as fast as possible while carrying a sack with weights of 30 kilograms (66 pounds).

Only the top 10 candidates will advance to the interview phase, which will weed out another five.

“I practiced every day at a nearby recreation field in my neighborhood or sometimes in a parking lot,” said Son Seong-hoon, 38, who currently works for a tourism company in Seoul.

“I got a backpack and filled it with sand to simulate the actual test,” he said.

Low-ranking civil servant, city or district office jobs like street cleaning used to be tacitly dismissed as menial jobs for high school graduates. No self-respecting college graduate or company man would dream of applying for one.

Times have changed, and many aging Koreans are worried about their later years and the weak social safety net built by Korean society. Men are, brutally, retired in their early or mid-50s or even their 40s, and their severance packages aren’t that generous. The National Pension Service doesn’t pay out kingly amounts, and welfare for seniors has traditionally been neglected, although it’s being expanded under the Park Geun-hye administration.

As a result, the poverty rate for Korea’s elderly population is the highest among 34 advanced countries, according to this year’s report by the Korea Institute for Health and Social Affairs. The report compared Korea’s situation with the members of the Organization for Economic Cooperation and Development during the period between 2006-8. The country’s social welfare spending for seniors was the second lowest among the member countries, accounting for 1.7 percent of the country’s gross domestic product, ahead of Mexico only.

“I now work as a health trainer in a fitness club and the job pays me well,” said a 42-year-old man who only gave his surname, Yoo. If he was identified in full, Yoo said, he might get fired from his job.

“But I don’t think I can work in my 50s and 60s,” he continued. “This cleaner job guarantees a retirement age. The retirement age at private sector jobs is basically a fiction because most workers are pushed out of their jobs in their late 40s or early 50s.”

All 10 applicants for the sweeper jobs in Yeongdeungpo that were interviewed for this story cited job security as the primary reason for their interest. The Ministry of Employment and Labor said the average retirement age formally claimed by private companies is 58.4. But the reality is different, as survey results demonstrate. The average retirement age perceived by workers was 52, according to a survey of 1,216 workers by online job searching firm Job Korea.

“The government is now trying to set the mandatory retirement age at 60 to resolve the employment uncertainty prevalent among many older workers,” said Lee Jun-hyup, a senior researcher at Hyundai Research Institute.

“I’m not sure whether this type of policy will ultimately solve the issue because earlier retirement is deeply rooted in the corporate culture of big conglomerates,” the researcher said.

Retiring workers at younger ages allows companies to hire many more people graduating from universities, and young workers are cheaper than veteran workers. Korea also has a high youth unemployment rate. Competition for humble jobs such as sweepers is a fairly new phenomenon.

“When I applied for the cleaner job 15 years ago, the hiring process was much simpler because there weren’t so many applicants,” said Lee Seong-wan, who assisted the district office at the fitness test in Yeongdeungpo last month. “All I needed to do was fill in my information and submit medical reports to show I had no major disease. Later, I heard I was the only applicant.”

The Yeongdeungpo office said it started seeing a surge in candidates in the late 2000s. Every year there are more and more applicants for street sweeping jobs, the district said. A quarter of them are college graduates.

In smaller cities, municipal governments are in charge of hiring road cleaners, and they’re being swamped with applications too.

“Not long after I began this job, I remember a mother pointing at me and telling her son, ‘If you don’t study harder, you could become like that person,’?” recalls Lee. “Now, my friends and relatives ask how they can apply.”

Competition is also skyrocketing in the national exam to recruit ninth-grade civil servants, the second-lowest ranking. People used to look down on the jobs and aim for foreign service positions, sixth-grade, or fifth-grade civil servant posts, which are deputy director levels. Not any more.

This year, a total of 204,698 applicants sat for the test, the highest since records started in 1949, according to the Ministry of Security and Public Administration. It noted that the ratio of test takers to jobs was 74.8 to 1.

“The competition is really fierce and most first-time applicants like me don’t expect to pass the exam,” said Seo Jung-hyun, 29, who now works at one of the top 10 conglomerates. “If you are working at a big conglomerate, you can earn lots and lots of money, but the thing is that you don’t have time to spend it.”

“When my colleagues reach 40, they become extremely worried,” Seo said.

Some analysts think the desperation to get civil servant jobs is not good for the country in terms of effective distribution of human resources.

“It’s not efficient if too many students pursue careers in the public sector for job security alone,” said Lee Jae-yeol, a sociology professor at Seoul National University.

“But that appears to be the case in many universities.”