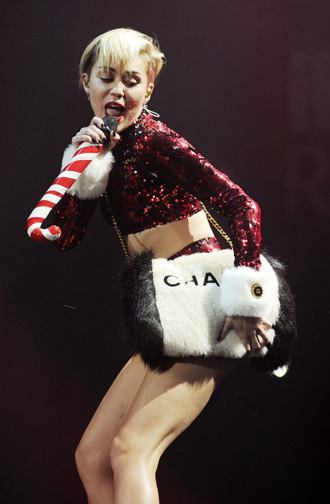 Miley Cyrus performs during the KIIS-FM Jingle Ball concert at Staples Center in Los Angeles on Friday. MTV declared her its best artist of the year. [AP/NEWSIS]

NEW YORK - Here’s something to wag a tongue at: MTV says Miley Cyrus is the best artist of the year.

The former child star twerked her way to the top. Her eye-popping duet with Robin Thicke on the MTV Video Music Awards was one of the year’s most talked-about cultural events.

MTV said Monday the VMA duet on “We Can’t Stop’’ and “Blurred Lines’’ was the year’s most watched video on its websites. Similarly, the MTV artist site devoted to Cyrus had more visits than any other artist’s.

Besides “We Can’t Stop,’’ the song “Wrecking Ball’’ and album “Bangerz’’ were big hits for Cyrus, who also had notable appearances on “Saturday Night Live’’ and MTV’s European music awards show.

“She dominated the music charts and critics’ best-of lists while creating some of the year’s most memorable moments,’’ Doyle said.