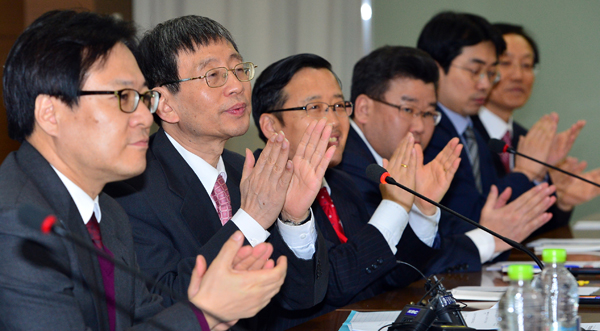 Members of a presidential committee on easing government regulations applaud after listening to complaints from small and midsize enterprises at Gwangju Hi-tech Compound earlier this year. [JoongAng Ilbo]

Last month, an interesting conference was held in Berlin. Celebrating the fall of the Berlin Wall on Nov. 9, 1989, the conference was titled “Falling Walls,” and scholars, artists and entrepreneurs got together to encourage convergence studies by tearing down walls between fields of study and organizations. Successful convergence research cases and new ideas were presented.

After the conference, about 30 leaders of various research institutes from around the world met and discussed obstacles to the advancement of science. The U.K. chief scientific adviser, board chairman of the Helmholtz Association of German Research Centres, former director of the Pasteur Institute in France, editor in chief of the American journal Science and presidents of many research universities were in attendance. The officials discussed issues such as expanded participation of female scientists, more active exchanges between industries and academics, and communication between scientists and the public, but U.K. Chief Scientific Adviser Mark Walport’s proposal of “how to overcome excessive regulation” garnered more attention.

Walport argued that excessive regulation interferes with advanced research and industrial growth in Europe and cited the example of genetically modified organisms (GMOs). Europe traditionally has strict regulations on GMO products. It is nearly impossible to grow genetically modified crops, and European scientists cannot conduct research to drastically improve produce. It not only undermines the agricultural development of Europe but also discourages effective methods to help countries with food shortages, especially in Africa.

In fact, it is undeniable that our regulations on scientific research and advanced industrial technologies have been slack compared to other developed nations. The laws themselves were loose or loosely applied when the laws were close to the standards of developed countries. Most notably, safety controls on laboratories and industrial fields had been quite slack. But after accidents at school labs and industrial sites, regulations and applications are becoming tighter. After Professor Hwang Woo-suk’s case, regulation on embryo-cloning research has become very strict. After a number of accidents at chemical plants, supervision on industrial sites has been reinforced. Authorities have reasons to tighten regulations after it was discovered that some engineering graduate school research labs were safety blind zones.

However, I am concerned that the regulation is being overly tightened and may become excessive, just as Walport pointed out. Most notable is the example of the act on chemical substance registration and assessment. The purpose of the law is valid, as it aims to systematically manage chemical substances circulated in Korea in order to prevent accidents and damage to citizens.

However, insiders are concerned the regulation is overly strict considering the reality of the industry and would seriously impede research and industrial activities. Fortunately, the government embraced the opinions from industry experts and academia, and plans to modify it. But such an excessive regulation should have been screened from the beginning. While problematic items in the bills proposed by the government could be screened during consultations among ministries and evaluations by the Regulatory Reform Committee, there is no such process for bills proposed by members of the Assembly, and the bills are more likely to include excessive regulations.

In fact, all regulations have justifications. But if adverse side effects are greater than benefits of the regulation, we need to seek alternatives. Just as we say, “The devil is in the details,” even a good-intended bill could lead to unexpected side effects in the process of implementation. Same concerns exist regarding the regulation on scientific research. While we are busy catching up with the developed nations, we don’t need to repeat their mistakes.

*The author is a professor of physics and the dean of the Institute for Basic Science at Seoul National University.