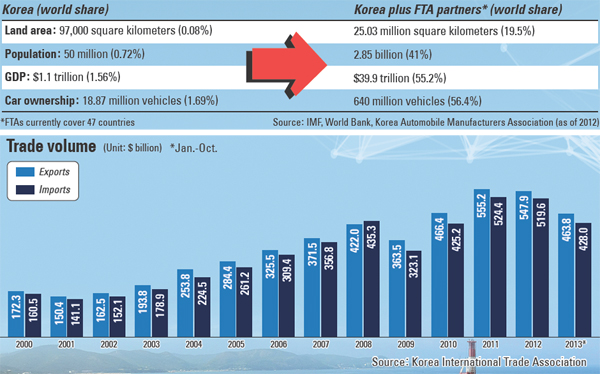 Trade pulled Korea out of the ashes of its civil war.

Sixty years later, it’s still pulling the country out of every crisis that comes along.

When the Asian financial crisis hit the country like a knockout punch, Korea’s foreign debt was a record high of $116.1 billion. In November 1997, however, Korea had as little as $8.87 billion in foreign reserves.

Just a few short years later, Korea experienced another crisis when its stock market was hit by the global bubble bursting of the IT-Internet bubble in 2001. Many Korean tech firms and startups went bankrupt, and investors panicked.

The most recent crisis was triggered by the collapse of the U.S.-based Lehman Brothers in 2008 that started a global financial meltdown, which countries are still recovering from.

After 16 years of almost continuous crises, Korea is now the 15th-largest economy in the world by gross domestic product and is one of the nine countries whose trade exceeds $1 trillion. The others are the United States, Germany, China, Japan, France, Italy, the United Kingdom and the Netherlands. Among those countries, only three other than Korea exceeded the trillion-dollar milestone for three consecutive years.

The size of Korea’s foreign reserves, which nearly emptied out in 1997, was $356.1 billion at the end of October, the world’s eighth largest, according to the Bank of Korea.

“In times of difficulty, active trade played the role of a savior, allowing the Korean economy to recover fast from hardships,” said Hong Ji-sang, a senior researcher at the Institute for International Trade under the Korea International Trade Association. “Expansion in the volume of exports and trade surpluses helped Korea recover relatively fast from the Asian financial crisis. Even in the two other crises - the IT bubble and the global financial meltdown - Korea was able to overcome them by boosting exports.”

Hong added that trade is not only a driving force for Korea’s economic growth but also stimulates job creation, foreign currency gains and increases in per capita income.

It is an old line to say that Korea, with a population of only 50 million, has managed to build an economy with a GDP of $1.1 trillion. That line reads a little differently if you factor in the country’s free trade agreement partners. They are 47 countries, including the United States, the 28 members of the EU and 10 members of the Association of Southeast Asian Nations (Asean).

With them, Korea has free trade with a population of 2.85 billion and a GDP of nearly $40 trillion.

“For over a decade, the Korean government has pursued a strategy in expanding its trade partnerships with other countries,” said Je Hyun-jung, a researcher at the Korea International Trade Association. “Forging free trade agreements with countries eventually led the volume of Korea’s exports and imports to grow significantly and also its gross domestic product.”

The first trade agreement that went into force was with Chile in April 2004 after years of negotiations that began in December 1999.

Since its first FTA, Korea has actively sought trade agreements that break down trade barriers for local exporters. Korea, having a small domestic economy, depends heavily on exports. Other negotiations were soon launched, signed and ratified with countries like Singapore, the European Free Trade Association, Asean, the European Union and Peru.

The Korea-U.S. FTA that went into effect in March 2012 has accelerated negotiations with other major economies that are currently under way.

According to the Trade Ministry, Korea is in negotiations with China, Indonesia, Vietnam, the China-led Regional Comprehensive Economic Partnership and Canada, as well as a trilateral deal with China and Japan. It recently decided it would soon join negotiations for the Trans-Pacific Partnership, a trade pact among 12 nations including the United States, Japan, Canada, Mexico, Peru, Chile, New Zealand and Australia.

Officials at the Trade Ministry note that Korea is close to reaching a deal with Canada and will resume negotiations with New Zealand on an FTA early next year.

Korea also signed a tentative deal with Colombia last February that is awaiting ratification by the legislatures of both countries. Korea reached a deal with Australia last week at a trade ministers’ meeting in Bali, Indonesia, which will make the Pacific country Korea’s 11th FTA partner once the deal is ratified. That deal came almost five years after the two countries started negotiations in May 2009.

“After holding negotiations on some technical issues and reviewing the legal terms of the written agreement, we plan to sign the agreement in the first half of next year,” Trade Minister Yoon Sang-jick told reporters last Thursday.

Trade officials said the Korea-Australia deal will go into effect as early as 2015.

According to the ministry, the deal includes Australia exempting tariffs on its major trade items to Korea within five years, while for Korea the period is eight years. The deal also includes Australia immediately getting rid of 5 percent tariffs on Korea’s major export items like electronic goods, including automobiles and televisions as well as other machinery products. Australia also agreed to exempt tariffs imposed on Korean auto components within three years after the deal goes into effect.

Both countries also agreed to adopt the investor-state dispute settlement (ISD) clause that allows foreign investors the right to initiate dispute proceedings through international law. This clause is expected to prevent Korean companies entering the Australian market from seeing losses from investments due to unfair activities.

Industry sources note that it is the first time that Australia has agreed on the ISD clause with another country in a free trade deal. The ISD clause is not included in the U.S.-Australia FTA. 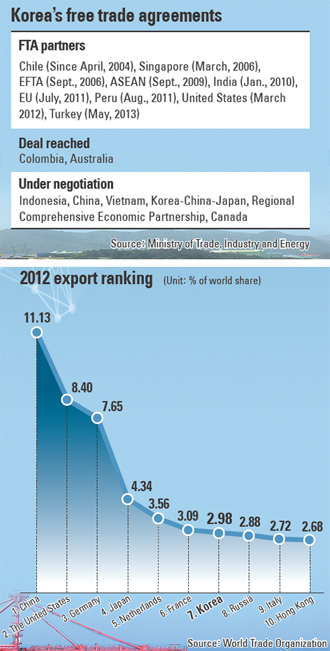 Reaching a deal with Australia is expected to accelerate negotiations with other countries. Among the possible deals, most of the attention is going to the trilateral negotiation involving Korea, China and Japan.

So far, the government has expressed optimism that the trilateral deal is heading in a positive direction.

Last month, the three countries ended four days of talks in Tokyo. Those followed talks in Shanghai in early August. The first round was held in Seoul last March.

“The fourth round of negotiations for a trilateral FTA with China and Japan will be held in February,” said an official from the Trade Ministry.

The deal, if concluded, is expected to create the third-largest economic bloc in the world after the North American Free Trade Agreement (NAFTA) and the EU. Its combined GDP would be more than $14.3 trillion. According to trade officials, the three countries account for more than 21 percent of the world’s total population and more than 20 percent of the global GDP.

However, farmer groups in Korea fear the trilateral pact. They think it will do more damage to the domestic agricultural sector than any other FTA Korea has signed.

“The agreements with the U.S. and the EU have already created enough hardships for the country’s agricultural industry, and we really oppose the negotiations for a trilateral FTA with China and Japan,” said a spokesman of the Korean Advanced Farmers Federation.

When the first negotiations for the trilateral pact were launched in Seoul early this year, the federation and other agricultural organizations held a rally.

Farmers in Korea have also expressed concerns over the Korea-Australia FTA. According to the deal, 15 years after the pact goes into effect, the 40 percent tariffs imposed on Australian beef will be removed completely.

“This is a matter of survival for us,” the Korean Advanced Farmers Federation said in a statement last week. “Before the government opens up the country to others, it should first think about measures to protect the agricultural sector.”

The impact of the deal with Australia is expected to be huge on cattle owners, especially considering that the market share of Australian beef already accounts for 56.9 percent - the highest in the country’s imported beef market.

Despite the Korean government’s aggressiveness in trade deals, consumers are still dubious about the benefits they are supposed to bring. Based on the Korea-U.S. FTA, for example, the 24 percent tariff on fruit was immediately eliminated. But consumers hardly noticed.

Huh Seon-suk, a 60-year-old homemaker, sighs when asked about the price of imported fruit at large discount stores.

“The price of cherries, for example, is still expensive in Korea,” Huh said. “I cannot really feel that prices have gone down after the FTAs went into effect.”

She said that perhaps she had “too high expectations.”

A 62-year-old surnamed Lee is a wine lover. When the Korea-Chile FTA went into effect in 2004, he expected that the price of wine from the country would fall significantly. The deal required that tariffs on Chilean wine be removed immediately.

“There is more variety now than in the past, but wine is still relatively expensive,” he said. “To buy a decent bottle of wine in Korea still requires several thousands of won. I was expecting wine for less than 10,000 won ($9.49).”

When the Korea-U.S. FTA went into effect, there were high hopes that the price of American products would go down immediately. The deal removed tariffs on more than 9,000 items.

“Despite the trade deals, imported goods in Korea are still very high priced,” said an official from the Korea Consumer Agency. “That’s because importers or retailers tend to hold onto their high commissions.”

Small businesses also worry that with an increasing number of trade deals, they are placed in a more difficult position when doing business overseas as they lack infrastructure in dealing with legal changes.

“We have set up a department to provide support to companies including small and midsize ones,” said an official from the government. “There’s fierce competition out there among countries to expand their economic territory by pushing many FTA deals as they can and Korea cannot be left behind.”