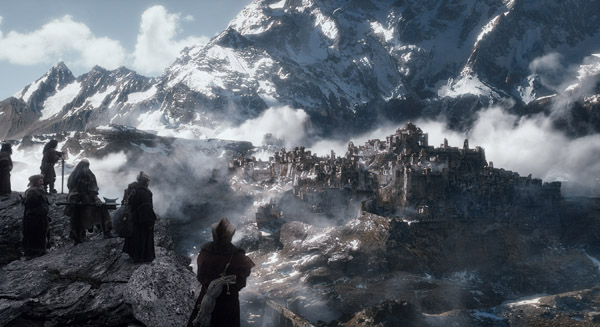 A scene from “The Desolation of Smaug,” the second film in “The Hobbit” trilogy. Provided by Warner Bros. Korea

The second film in “The Hobbit” trilogy, “The Desolation of Smaug,” picks up from the first installment with a young Bilbo Baggins setting out with a band of 13 dwarves and Gandalf the Grey to Lonely Mountain. The group is, of course, there to vanquish the dragon Smaug, retrieve the treasure guarded by the monster and restore much-sought peace to the townspeople of Dale.

They say the journey is half the fun, and the movie really tries to convey that through the route that takes the bandit through Mirkwood, Esgaroth, the town of Dale, and eventually to the dragon’s lair. But it’s a winding journey and a lengthy one, too.

As in the “Lord of the Rings” trilogy, Gandalf (Ian McKellen) appears sporadically, which means the little people - dwarves and Bilbo (Martin Freeman) - take center stage, making their way through Middle-earth. There is danger lurking behind every corner of the 48-frames-per-second film. But the pace is slow, and you are forever wondering when the dragon Smaug, voiced by Benedict Cumberbatch, will rear its ugly head. 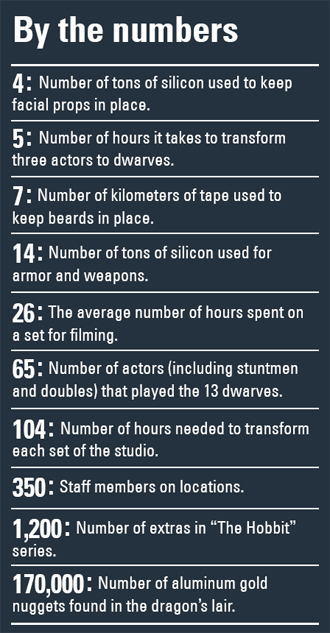 The movie is the fifth in the line of director Peter Jackson’s Middle-earth tales, and so the foes and locations are all very familiar. While it’s still exhilarating to see CGI, gruesome orcs, elven kingdoms and even sneaky giant spiders that speak, unfortunately it’s nothing new by now. To make up for the sense of originality, there are some twists penciled in by the producers. Cue the pretty elven maiden Tauriel (Evangeline Lilly) and the love triangle between Legolas (Orlando Bloom) and Kili (Aidan Turner).

Although not in the original book, the trio’s relationship does inject some excitement and drama into a movie in which females are scarcely seen. And let’s face it, it’s nice to see someone other than a dwarf. There are subtle jokes intermittently throughout the film that serve as revisions of what’s to come much later on. In particular, scenes in which Bilbo’s fondness for his new ring that later disrupts Middle-earth in the LOTR trilogy are laden with significance.

But even with all these new tricks, there is something lacking in the way of characters and the plot, a kind of sense that the plethora of individuals presented were undervalued. You can’t help but want to see more of the skin-changer Beorn as he shape shifts between bear and man, then linger awhile at the wood-elves’ haven.

Set 60 years before Frodo and the impending doom of Middle-earth, it’s hard to take the dwarves’ quest so seriously in context. We all know how it ends - or doesn’t end. Of all the J.R.R. Tolkien adaptations, this one is said to be the least true to the facts, but Jackson pulls off the feat well, showing his knowledge of the subject matter that has won him more than 249 awards and grossed $2.9 billion worldwide.

But even so, the fact that Jackson is the master of his craft can’t conceal the fact that making three movies (lengthy ones at that) from one children’s book is a bit too much. While the Middle-earth Earth portrayed by Jackson and New Zealand is always beautiful to behold, those who are not fans of the genre may find the 161 minutes painstakingly long and the plot all too familiar. The movie is available in both 2-D and 3-D. The film opened yesterday.