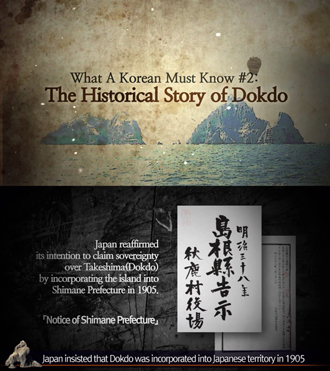 A screen grab of the six-minute English-language YouTube video clip entitled, “What A Korean Must Know #2: The Historical Story of Dokdo,” a collaborative effort posted online yesterday. [NEWSIS]

Japan’s Ministry of Foreign Affairs unveiled multi-language YouTube video clips asserting its claim over the Dokdo Islets in the East Sea, which it calls Takeshima, prompting Seoul to lodge a formal complaint requesting they remove the material.

Cho Tai-young, the spokesman for Korea’s Ministry of Foreign Affairs, said at a briefing yesterday that it “strongly protests” the Japanese Foreign Ministry’s posting of video clips - which are recorded in nine languages - and demanded they “immediately” be taken down.

“We will not allow under any circumstances Japan’s attempts to detract from our territorial rights,” he emphasized.

Following the release of the Japanese and English versions of the clip in October, Japan’s Foreign Ministry made videos narrated in Chinese, Arabic, French, German, Italian, Portuguese, Russian and Spanish, as well as Korean, available on Tuesday on its official YouTube channel.

On Oct. 16, Japan’s Foreign Ministry released the original 87-second video on its YouTube channel claiming sovereignty over Dokdo The video has since had more than 650,000 views. And on Oct. 31, it released a 2-minute English version of the video, “Takeshima - Seeking a Solution based on Law and Dialogue,” which has received more than 160,000 views, more than 10,000 “likes” and just less than 220 “dislikes.”

It further states that the Japanese government has proposed three separate times raising the issue of the islets’ sovereignty at the International Court of Justice. Korea, however, argues that there is no dispute and therefore no reason to raise the issue at the International Court of Justice. The Korean Foreign Ministry urged Japan to delete the video in both instances, but it declined to do so.

Ahead of Dokdo Day on Oct. 25, the ministry released its own 12-minute video on its home page. But soon after, local media uncovered that the footage used in the short had been lifted from a 2011 Japanese drama.

Officials promptly apologized, explaining that the video had been produced by an external company. It allegedly cost 66 million won ($62,747) to make, and was taken down just 11 days after it was uploaded. Since then, the ministry has been working on a new video.

The video was one of several efforts following former President Lee Myung-bak’s landmark visit to the Dokdo islets in August 2012 to better promote Korea’s claim over the islets.

“A [new Dokdo] video is in production and will be made available on our website and YouTube soon,” Cho, the Foreign Ministry spokesman, said yesterday. He added that the new video would be available in multiple languages and would possibly be released within the year.

However, this time around there is more at stake. “If we make one, we have to make one that’s better than Japan’s video,” a senior Korean foreign affairs official admitted, adding that the ministry has been considering different approaches to take, its budget and the length.

The Foreign Ministry said that it had submitted a budget proposal to the National Assembly’s foreign affairs committee for next year; the plan calls for 6.83 billion won to be used toward the promotion of Dokdo and other territorially disputed areas - a 60 percent increase from the amount originally proposed by the government.

But despite the delays, many Koreans have been actively promoting Dokdo in their own way.

A 6-minute English clip entitled “What a Korean Must Know #2 - The Historical Story of Dokdo” was posted yesterday. The video was a collaboration between Megastudy, an education institute; the Northeast Asia History Foundation; MBC; the Dokdo Museum; and Ulleung County. A Korean version was released in October ahead of Dokdo Day.

The video claims the islets ? which belong to Dokdo-ri, Ulleung County in North Gyeongsang - “have been our territory for 1,500 years,” based on historical documents.

Dokdo, which is also called Usando or Gajido, is 87 kilometers (54 miles) east of Ulleung Island and is visible on clear days. “Japan’s insistence of dominion over Dokdo is a thoughtless,” the video continues, and “a denial of Korean independence.”