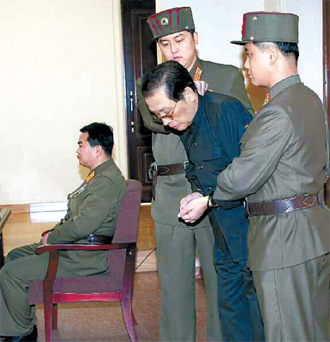 Security guards take Jang Song-thaek, the second-most powerful figure in the country and uncle of North Korean leader Kim Jong-un, to the tribunal, where he stood handcuffed with apparent bruises on his hands and face. North Korea announced Jang was executed right after the tribunal. The Rodong Sinmun published this photo on Page 2 on Dec. 13. [Rodong Sinmun]

North Korea publicly announced that it had executed Jang Song-thaek, the powerful uncle of ruler Kim Jong-un, after he was convicted of treason in a special military tribunal.

His death is one of the most glaring examples of the extreme brutality of the North Korean regime under the two-year rule of Kim Jong-un, and it is the first time the regime has admitted to killing one of the members of the ruling family.

The court charged Jang, a vice chairman of the powerful National Defense Commission and the director of the ruling Workers’ Party’s Administrative Department, with plotting to overthrow the government and knocking his nephew from power in order to become the new leader of the regime.

The KCNA released several photos of Jang, once regarded as the second-most powerful figure in the country, at the tribunal, where he stood handcuffed - propped up by security guards - with apparent bruises on his hands and face.

His execution comes just four days after he appeared at a party meeting, where it was announced that he would be stripped of all his positions and expelled from the party.

Calling him “a dirty traitor,” state media claimed that Jang was charged with “anti-party, anti-revolutionary factional activities” within his own faction and the military.

Those charges are a violation of North Korea’s Criminal Law Act 60, carrying a sentence from five years in prison up to the death penalty for those convicted of killing, abducting or injuring any official or person for the purpose of treason.

“This guy had his despicable political ambitions for a long time, but he could not even raise his head when our Great Leader Comrade [Kim Il Sung] and Great General Comrade [Kim Jong-il] were alive,” the report said. “But when the time for a shift in revolutionary generation came, [the succession of Kim Jong-un], he showed his real face as he thought it was the right time [for treason].”

Jang abused his power to take control over state affairs, including key business projects by the cabinet, state media said. To do that, he created his own political faction and appointed his loyalists to key posts.

The KCNA report mentioned Ri Ryong-ha, the first deputy director for the ruling party’s Administrative Department, and Jang Su-gil, calling them Jang’s “flatterers.” Both the men, who were close aides to Jang, were executed late last month.

Jang’s loyalists, including his two aides, called him “Comrade No. 1,” the report said, and Jang made his circle a sort of “small empire that no one could attack.”

Jang himself was also confident in his plan, the media said; and he “had an illusion that he was an icon of reform” in the reclusive regime.

Some detailed descriptions followed on Jang’s interference with the state business of the cabinet.

Allegedly, Jang, a party official in charge of foreign business, sold an abundance of natural resources - including coal - overseas for a cheap price, which the report claimed resulted in massive debts to the state.

He also signed a contract that would allow foreign investors to use land in the Rason Special Economic Zone free of charge for 50 years, according to the KCNA. He was also blamed for leading failed currency reforms in 2009.

The report meticulously details Jang’s alleged corrupt activities - how he opened of slush funds, bought jewels and precious metals with state money, and sent “obscene and dirty photos” to his confidantes. It also goes on to state that he gambled away approximately 46 billion euros ($63 billion) from his slush funds.

The young leader’s uncle was also charged for exhibiting an arrogant attitude at public events. The report points out, for instance, that Jang “was insincerely clapping at the third meeting of the party representatives,” where Kim Jong-un made his first public appearance in September 2010.

At the hearing, Jang was given a chance to make a last statement, the KCNA said. In it, he admitted to all the charges.

“I attempted to provoke anger from the military and the public [and instill the idea] that the current leadership had no means to improve the destructive economic situation or the livelihoods of people,” Jang allegedly said. “I tried to use senior military officials who have ties with me. I thought the military would also agree on my plan for a coup if the livelihood of the people and soldier got worse .?.?. My two aides, Ri Ryong-ha and Jang Su-gil, were willing to follow me, and I thought several spy agents would also be on my side.”

After the ruling, Jang’s execution was “immediately implemented,” the KCNA said, although how he was killed has not been confirmed.

“When Jang’s two aides were executed, the NIS told me that they were shot by machine gun,” Representative Suh Sang-kee, a Saenuri party lawmaker and the chairman of the National Assembly’s Intelligence Committee, said yesterday at a press briefing. “We assume that this [execution of Jang] was also carried out in the same way.”

Unlike other ordinary trials, North Korea ended the tribunal as a single trial, the lawmaker said.

However, the hasty decision to execute Jang could possibly be a sign of the vulnerability of Kim Jong-un’s rule.

“The regime attempted to pin on Jang responsibility for the failure of its policies,” Suh said. “The execution shows that Kim Jong-un’s reign is weaker than that of his father’s, so he attempted to prevent any internal turbulence surrounding Jang.”

“The government had a national security policy meeting to discuss the current situation in North Korea, including the execution of Jang Song-thaek,” said Kim Eui-do, spokesman for the Unification Ministry. “We will continue to monitor the situation, prepare for all possibilities and cooperate with concerned countries.”

In response to allegations that Jang violated the North’s Criminal Law Act 60, Kim said; “We have not confirmed whether Jang killed or injured someone. And the North Korean criminal law could have been revised in December 2012.”

Unification Minister Ryoo Kihl-jae attended a hearing by the Assembly’s Intelligence Committee to brief them on the incident, the biggest political upheaval in Kim Jong-un’s reign.

When asked about local media reports that claimed two North Korean deputy prime ministers allegedly sought asylum in China, the minister said he had no information on the matter. “Whatever the truth is, there have been similar cases [purges] like this in North Korean history,” the minister said, “but it is rare that the regime publicly announces such incidents to the outside world so openly through media.

“If it is true that there was a plot for a military coup [by Jang], it would show the instability of the [Kim Jong-un] leadership,” he added.

Ryoo said he had no information on allegations that North Korea had recently strengthened border security with China over the past few days.

Although there have been no signs from North Korea, it is still possible for the regime to initiate a military provocation, South Korea’s Defense Minister Kim Kwan-jin said.

“The regime could urge officials to compete with each other to show their loyalty to Kim Jong-un,” Minister Kim Kwan-jin told lawmakers at another hearing. “A heated competition to prove their loyalty could lead some of them to make mistakes. So we are wary of a possible military strike as well.” The defense minister dismissed allegations that Jang was purged in a power struggle with military hard-liners. “We don’t see this as having been led by the military,” he said. “We understand that this is part of the procedure to consolidate the sole leadership of Kim Jong-un through a reign of terror.”

According to Seoul, even after the report on Jang’s execution surfaced, there was no signal from the people of any kind of uprising.

However, a source in Beijing told the JoongAng Ilbo that China, the North Korea’s closest ally, had not expected the execution at all. “All of the organizations related to North Korean affairs, in the party, the cabinet, and the military are in emergency status,” the source said.

Allegedly, Beijing was surprised, as it did not have any sources about the purge of Jang.