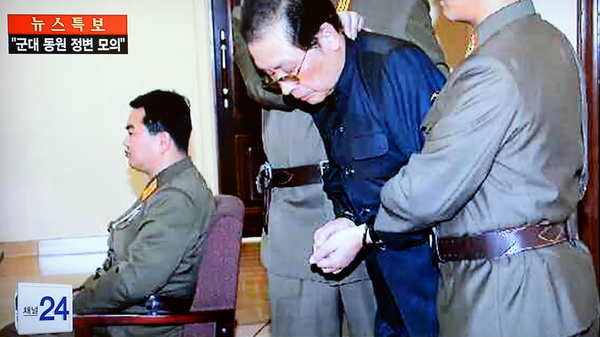 North Korea executed Jang Song-thaek, the powerful uncle of leader Kim Jong-un, accusing him of attempting a rebellion against the dictatorial leadership of the young leader, the regime’s state-run media said.

The official Korean Central News Agency reported this morning that the regime’s top spy agency held “a special military trial” where Jang attended as dependent and confessed his “anti-party, anti-state, anti-people” scheme to overthrow the dictatorial leadership of his nephew.

Calling him “a hideous human trash,” the state media said Jang plotted to betray the Kim dynasty with “political ambition” by creating his own political faction and taking a control over overall state affairs of government organizations, the ruling party, and the Cabinet.

Some businesses he led triggered a massive amount of state debts, such as selling natural resources and the Rason Special Economic Zone to foreign investors, the KCNA said. Meanwhile, he launched his own underground ring to raise his slush funds, the report said.

At the trial, Jang was given a chance to deliver the last speech, the KCNA said, and he confessed he attempted to stage a rebellion against Kim Jong-un “at a historically decisive moment.” When the impoverished regime face a risk of being collapsed, he said he would become the prime minister of the regime, as de facto leader, by kicking out his nephew.

Although he took no official control over the military, Jang reportedly said he believed he could rally support from the military for a coup when the political and economic situation get worse, the KCNA reported.

The ruling that gave him death penalty was “immediately implemented,” the state media said.

Since the 20-something, untested leader succeeded the rule of his father, late leader Kim Jong-il, who died in December 2011, Jang had been seen as a powerful protector for the young, untested leader and also a power broker behind-the-scenes along with his wife, Kim Kyong-hui, younger sister of the late leader and the aunt of Kim Jong-un. The whereabouts of the aunt of the leader is unknown, with allegations that she has been ill.