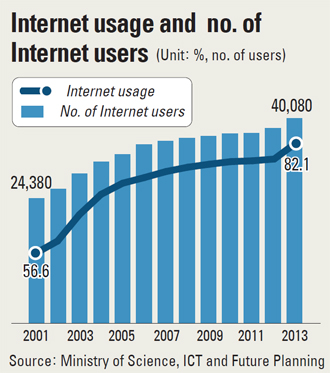 The number of Internet users in Korea has surpassed 40 million this year for the first time, the Ministry of Science, ICT and Future Planning said yesterday.

According to the Internet Usage for 2013 survey, published by the ministry and the Korea Internet and Security Agency, there are 40.08 million Internet users in Korea.

The Internet utilization rate has also increased from 65.5 percent in 2003 to the current 82.1 percent.

When compared to last year, the number of Koreans owning a smart mobile device rose significantly from 63.7 percent to 71.6 percent, while the rate of computer ownership fell from 82.3 percent to 80.6 percent.

On the other hand, the Internet usage rate of wireless devices such as smartphones increased from 58.3 percent last year to 91 percent.

By age group, Internet use by those in their 40s and 50s has increased considerably.

Changes were also seen in the Internet service sector regarding platforms. While the use of email plunged from 84.8 percent last year to 60.2 percent this year, the use of mobile messaging services such as KakaoTalk and Line jumped from 60.1 percent to 82.7 percent.

Among Internet banking users, the utilization rate of mobile banking rose from 29.2 percent to 65.4 percent, and the mobile shopping rate also expanded from 23.8 percent to 43.2 percent.

“The number of Internet users is constantly increasing, and people’s Internet usage patterns are also changing rapidly toward the mobile-centered Internet services,” said a spokesman for the Ministry of Science, ICT and Future Planning.

“We expect the companies that adapt to the changing market conditions will create performances.”