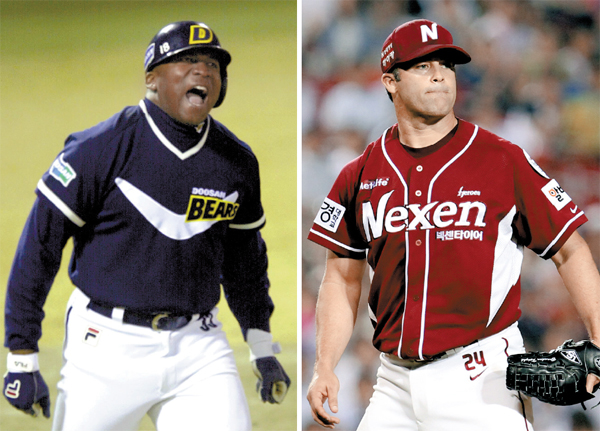 After another successful season, the Korea Baseball Organization handed out a series of player awards during events hosted by the media and sponsors last week. The biggest event was, of course, the Golden Glove Awards, which were held on Dec. 10 at COEX in Samseong-dong, southern Seoul.

The Golden Glove Awards in Korea are somewhat different than in Major League Baseball in that the KBO awards honor the best player at each position, not the best fielder at each position. But when the awards for each position were announced, none of the league’s 19 foreign players were selected as a winner, despite their excellent performances.

The position that caused the most controversy was pitcher - there were many foreign fielders in past seasons, and all of the KBO teams filled their foreign player quotas with pitchers this season. But the winner of the pitcher’s Golden Glove was Nexen Heroes closer Sohn Seung-rak, who had a record of 3-2 with 46 saves - the most in the league - with a 2.30 ERA.

Sohn had an excellent season. His 46 saves were the second most in KBO history, behind Oh Seung-hwan’s 47 in 2006 and 2011, but the problem is that there were certain other pitchers who did a better job.

For example, starting pitcher Chris Seddon of the SK Wyverns went 14-6 with a 2.98 ERA. His 14 wins were tied for the most in the league with Samsung Lions’ veteran starter, Bae Young-soo, but Bae’s ERA was much higher, at 4.71. Sohn received 97 of a possible 323 votes that were cast by sports reporters in Korea. Even Bae, who did an awful job in the Korean Series and whose ERA was over 4.00 in the regular season, received 80 votes; the second most among the candidates.

The Lions’ Oh failed to win a Golden Glove in 2006 and 2011 when he set a new record for saves. Sohn won the award with the fewest number of votes for any position in KBO history. It was also the first Golden Glove given to a reliever since Jung Myung-won of the Taepyeongyang Dolphins won in 1994. Sohn said he didn’t prepare a speech because he never expected to win. The reason he won is quite simple. The voters don’t seriously consider foreign players as part of the league. There must be some problems in reporting about foreign players, and one of the biggest issues, of course, is a language barrier.

Korean reporters sometimes write about foreign players, mostly at the beginning of the season because teams often import a new face every year and it is their job to introduce new players to fans. But the voters maintain much closer relationships with Korean players, not only because they can communicate with them with no problem but because they have been around for a long time. Such circumstances make the Golden Glove Awards more of a “popularity vote,” in which the reporters vote for their favorite players.

Last season was even worse because the pitcher’s Golden Glove went to Jang Won-sam, the Lions’ lefty ace who won 17 games with an ERA of 3.55, and not to the Heroes’ Brandon Knight, who won 16 games - the second most in the league - and had an ERA of 2.20 with 208.2 innings pitched and 27 quality starts. His ERA, innings pitched and quality starts were the best in the league.

It has been 16 years since the KBO began importing players from foreign leagues, and 245 players have played on KBO teams. But only 10 of them have won the award. Only two of those players were pitchers - Daniel Rios of the Doosan Bears in 2007 and Aquilino Lopez of the Kia Tigers in 2009. Tyrone Woods, a former first baseman for the Doosan Bears, who is considered the best foreign player in the history of the KBO, watched his rival, Lee Seung-yeop of the Lions, take home a Golden Glove. At the time, Woods was honored as the regular season MVP after he became the league’s home run king with 42 home runs. It looks like nothing has changed regarding the treatment of foreign players in the last 16 years.

When pitcher Ryu Hyun-jin of the Los Angeles Dodgers was one of the nominees for the National League’s rookie of the year award about a month ago, Korean media outlets and fans hoped the 26-year-old star would win. When the award went to pitcher Jose Fernandez of the Florida Marlins, many local media and fans said Ryu was undervalued because he is from an Asian nation. The same comments apply here. Seddon, Knight, Shirek and Woods suffered a disadvantage because they are foreigners.

In each hot stove season, fans, reporters and analysts look seriously at how teams import new foreigners or re-sign their current foreign players because they know that having decent foreign players will strongly impact the team’s next season. It means that they are a huge part of the team, and most of the teams don’t hesitate to invest big money on them.

As more money is being spent, big-name players with MLB experience such as Jorge Cantu (Doosan Bears) and Felix Pie (Hanwha Eagles) will appear on Korean baseball fields. They deserve better treatment, not only for their own comfort, but also to help develop the KBO into a better league. How about adding a “foreign player of the year” category to the Golden Glove Awards next year?