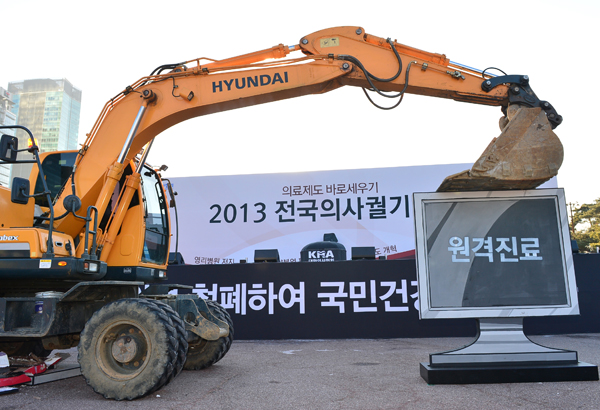 The Korean Medical Association puts on a performance using a crane in protest of telemedicine and other for-profit medical reforms as approximately 20,000 doctors gathered at Yeouido Park in western Seoul on Sunday, demanding the government “set straight medical policy.” [NEWSIS]

The government’s decision to establish telemedicine services and allow hospitals to set up for-profit subsidiaries has resulted in a public outcry, with some calling it the “privatization of medicine.”

Internet forums and SNS messages are rife with fears that a so-called privatization of medical care will lead to an increase of hospital fees and a rise in the cost of health insurance, among other concerns.

The government announced its decision last week to allow medical corporations that provide medical services to the public to establish for-profit subsidiaries. It also said it will enable the provision of telemedicine services, through which patients can have remote consultations via telecommunication equipment.

This would enable 848 medical corporations to run businesses for profit, said the Ministry of Health and Welfare, allowing them to sell medical appliances, health and beauty supplements and medical tour packages, among other things. The idea, it said, is to help these corporations raise money for their management and increase investment in the medical sector.

But doctors and the general public are nervous that this might signal the beginning of the privatization of medical care services or the establishment of for-profit hospitals.

On the largest childcare Internet cafe, there are numerous posts regarding the privatization of medical care. “If this is the policy of the government, this is pretty much the same as the privatization of medicine being passed. This will result in the extreme increase of treatment fees, and produce people who die because they cannot pay,” a posting on the website said.

There is some speculation that these medical reforms would cause the costs of certain medical procedures in hospitals here to skyrocket like they have in the United States.

The idea of telemedicine, according to the Ministry of Health and Welfare, is to enable doctors to perform remote-patient monitoring and treatment via telecommunications technology by 2015 and to extend care to patients in far-flung areas.

But critics point out that Korea already has one of the highest accessibility rates to doctors of the countries in the Organization for Economic Cooperation and Development (OECD), that it is not large like the United States, or an island nation like Finland.

The Korean Medical Association (KMA), the nation’s largest association of doctors, also has staged protests against the government’s plans to introduce telemedicine and for-profit hospitals.

More than 20,000 doctors participated in a rally Sunday in Yeoido, western Seoul, threatening a walkout if the government follows through with its medical policies without considering doctors’ opinions, they said.

KMA President Roh Hwan-kyu even inflicted a small cut on his neck as he delivered a speech to demonstrate that “the government is putting a knife to the throats of doctors,” with its medical policies. The medical system and doctors, he said, are “already bleeding.”

The Ministry of Health and Welfare has denied allegations that these medical policies will lead to for-profit hospitals and yesterday responded to public outcry over concerns of about the “privatization of medical services.”

Vice Minister of Health and Welfare Lee Young-chan told reporters that the plan has nothing to do with the creation of for-profit hospitals or the privatization of medicine.

There have also been concerns over possible plans to introduce for-profit hospitals owned entirely by investors, whose medical costs will not be covered by the state-sponsored health insurance system.

“Over SNS, there are groundless rumors stating that appendectomies will cost 15 million won and basic treatment will rise tenfold, because of the medical reform measures,” Choi said at the National Assembly yesterday. “It’s astounding that all kinds of rumors and speculations are rampant to the point that even elementary school children are talking about it.”

The measure to enable medical services to establish subsidiaries to do business “is an easing of regulations to enable small- and medium-sized medical corporate bodies to be able to conduct some profitable businesses,” he added.

He pointed out that university-affiliated entities also conduct a diverse range of for-profit businesses to help with the management of their hospitals, leaving smaller rural hospitals at a disadvantage.