Base salary ruling hardly a shock

Base salary ruling hardly a shock 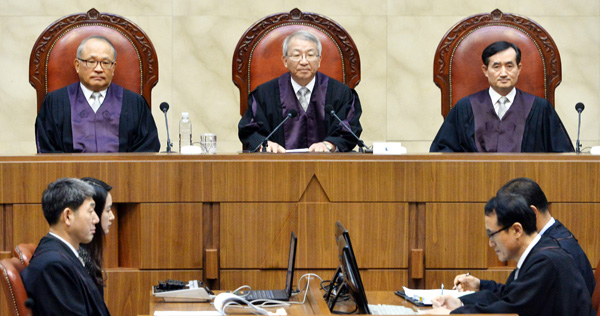 The Supreme Court recalibrated base salaries in a ruling on Dec. 18. [NEWSIS]

A credible futurist would comb through the dense forest of uncertainty in search of small yet potentially significant surprises in predicting what the future beholds. These surprises are hidden and masked as minor symptoms or signs. But once they surface, they could be explosive enough to change the landscape.

What appears evident through the looking glass does not catch the attention of a good soothsayer. What can be predicted - no matter how dangerous and grave it may be - could be less shocking because people have been warned and are better prepared.

Peter Schwartz is an acclaimed futurist who became famous for catching these minor yet potentially explosive surprises. After studying aeronautical engineering, he began to develop methods of so-called scenario planning and worked for Royal Dutch Shell as head of the oil company’s scenario planning.

With the liberty given by his employer, Schwartz applied his unique creative forecasting techniques that include thinking the unthinkable. In 1983, his scenario-building strategy led to the bold conclusion that the Soviet Union would collapse and disrupt international oil prices.

Shell paid heed to his advice, which was largely mocked at the time, and set a business strategy preparing for liberalization regarding control of the immense natural gas reserves in Siberia.

The Soviet Union indeed came down, and Shell jumped to make the most of the turbulent political climate and rose as a hugely profitable energy company. What Schwartz focused on were not evident political, international and military determinants, but veiled microeconomic factors, such as receding productivity, in forecasting the fall of an empire.

We desire these insights and foresight from our bureaucrats and politicians, but we have been repeatedly disappointed. They cannot even prepare for predictable and imperative dangers. For example, the bombshell repercussions from the extension in scope of base salary were foreseeable.

When the Supreme Court delivered its final ruling to include regular bonuses and other allowances as base salary, labor, employers, government and politicians were dumbfounded, as if they were taken by surprise.

They are raising an uproar about the extra multibillion-dollar labor costs the corporate sector would face due to increases in severance and overtime pay when they are counted in base salaries. Some talk about weakening national competitiveness. Has the skeleton suddenly jumped out of the closet?

The debate over base salaries has been simmering a long time. Back in 1971, workers returning from Vietnam raided the construction company that had hired them, demanding fair payment for their work. The question then also was whether various incentives and allowances should be counted as base salary. Court rulings took the side of the workers since the event.

In 1988, the Ministry of Employment and Labor interfered and announced a guideline for calculating base salary. It was an administrative order to separate regular bonuses and allowances from base salaries. Labor and management have been wrangling about the government guideline for 25 years. The dispute continued following a court ruling that overthrew the government order in 1996.

But it had not caused major social problems until the country sought an international bailout on the brink of national bankruptcy in the following year. Under the bailout program of the International Monetary Fund, the country underwent dramatic changes.

Labor and management created and increased various allowances, while leaving the salary base unchanged. Employers preferred to keep the salary base low to lessen the expense of severance pay when layoffs were inevitable. It was also cheaper to pay employees overtime when business picked up.

The union also did not lose. It believed it fought and won various welfare benefits for its members. The abnormal wage structure evolved and lasted throughout the next decades.

The Labor Ministry gets the most blame for this catastrophe. It has been advised to fix the guideline for decades. A former senior official admitted the government wanted to avoid the problem, foolishly hoping time will solve everything.

The ministry scrambled to organize a coordination committee ahead of the Supreme Court ruling, but it was too late. The time bomb was ticking while labor, management and the government looked the other way after throwing it at another’s court.

Let’s all drop the act. Stop pretending to be shocked and be honest. Everyone knew the wage structure was fundamentally flawed, but no one stepped forward to do anything about it.

The Supreme Court included an exception clause in view of the ramifications so retroactive application in extending the scope of base salary can be excluded if companies can prove that doing so would seriously threaten their finances. But what matters is the future.

Can labor, management and the government agree on a new wage system? We just hope we do not see another episode of silent play or a clamorous blame game.