For shipbuilders, it’s full steam ahead

For shipbuilders, it’s full steam ahead 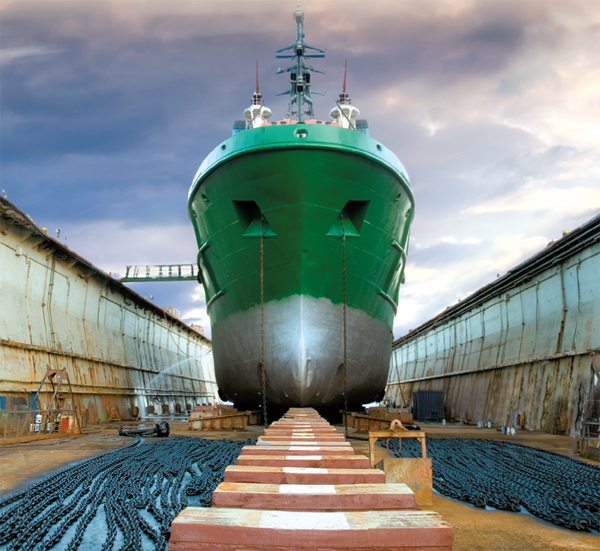 Is a new heyday on the horizon for Korea’s shipbuilding industry? The question has arisen as shipbuilders ring up orders one after the other and fulfill their 2013 goals.

Hyundai Heavy Industries (HHI), the world’s largest shipbuilder, became the first of Korea’s big three to reach its annual goal on Sunday, clinching a $970 million order to construct a power plant in Kuwait after forming a consortium with France’s Sidem.

Although this wasn’t HHI’s typical order, it pushed the company’s contracts this year to $24.3 billion worth, exceeding the 2013 target of $23.8 billion. The value of orders is the second largest in company history after the $25.8 billion recorded in 2007.

“With rising demand for fuel efficient vessels and large carriers, our orders this year rose around container carriers,” says an HHI spokesman. “Gas carrier orders also went up on expectations of increasing of shale gas production.”

Daewoo Shipbuilding and Marine Engineering (DSME) also reached its annual target of $13 billion last week, after winning a $539 million order from Zodiac Maritime Agencies, a London-based shipper, for six container vessels. The ships will be delivered by the middle of 2016 and the contract includes an option for four more.

Industry insiders see it as a certainty that the combined value of orders for Korea’s big three shipbuilders will reach $50 billion this year, the first time that has happened since 2007. Hyundai Heavy Industries is negotiating for orders to build LPG and bulk carriers, while Samsung Heavy Industries is working on an order for drill ships and DSME for LNG carriers.

According to the data from Clarkson Research Services, a U.K.-based company specializing in the shipbuilding industry, accumulated global shipbuilding order volume for the year, as of earlier this month, was 42.23 million CGT (compensated gross tonnage), a 93 percent increase from a year ago. CGT is a unit of measurement of shipbuilding output calculated by applying a conversion factor that reflects the amount of work required to build a ship in relation to a vessel’s gross registered tonnage.

Although the rise of China shipbuilders is a threat, the order backlog data shows Korea is still on the top of the industry and indicates that it will keep the position for a while.

According to Clarkson, the companies with the six largest order backlogs were Korea. Order backlog measures a company’s volume of work remaining; the larger the backlog, the more work in the pipeline.

Hyundai Mipo Dockyard and Hyundai Samho Heavy Industries, both affiliates of Hyundai Heavy Industries, were fourth and fifth. STX Offshore and Shipbuilding, which is in financial restructuring due to the liquidity crunch of STX Group, was sixth at 2.27 million CGT.

“Eco-ship is a global trend as environment regulation gets strengthened and is a critical way that shippers can cut costs,” says Park Moo-hyun, an analyst at E-Trade Securities. “Chinese shipbuilders can get more orders based solely on price competitiveness at present, but Korean companies have better fuel-efficient technology and will still be ahead of them.”

Analysts say demand for eco-ships will continue to increase and give Korean shipbuilders a steady volume of work.

According to data from Clarkson, the ship-dismantling volume for the year through the third quarter was 33.4 million deadweight tonnage (DWT). 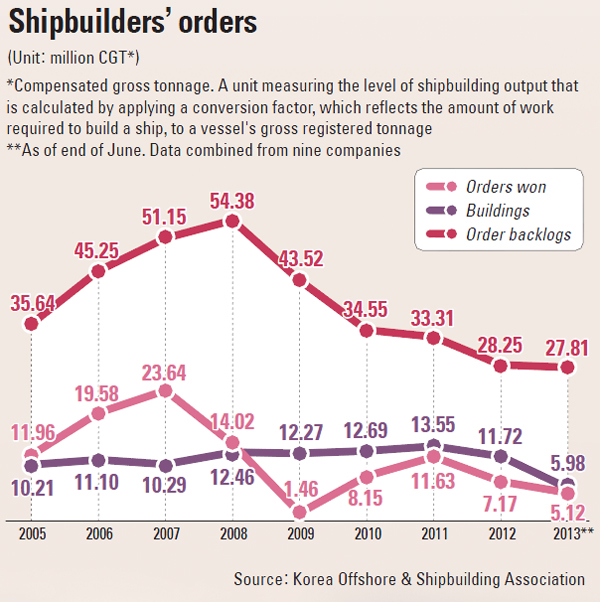 DWT refers to the total weight a ship can carry, including cargo, fuel, ballast water and passengers.

The figure is a 24 percent decrease from a year earlier, but nearly three times the average ship-dismantling breaking volume between 2005-8, which averaged 11.2 million DWT per year.

Because of the slump in the shipping industry in 2012, ship-scrapping volume was 58.3 million DWT, the highest ever.

Another good sign for local shipbuilders is the rising prices of new vessels. Clarkson’s new shipbuilding price index was 132 points last month on increasing orders for bulk and container carriers. The index was 126 in June. Industry insiders see the upward trend continuing because Clarkson’s index is slow to reflect market prices.

And experts say it will take two or three years for the benefits of orders secured in 2013 to show up on balance sheets. Most shipbuilders accept a so-called “heavy tail” payment system in which they receive most of their money in the final phase of construction.

Because of this delay, analysts predict the financial performance of Korean shipbuilders this year will not jibe with the headlines about new orders.

According to earnings data from individual companies, cumulative operating profit for the big three Korean shipbuilders declined by an average of 17.5 percent compared to a year ago. Analysts point out that orders in 2010-11 were primarily in the merchant vessel market where price competition with Chinese companies was fierce.

DSME had 315 billion won in operating profit through September, down 8.8 percent from a year earlier. However, Samsung Heavy Industries saw its operating profit increase 3.7 percent year-on-year to 934.8 billion won through this third quarter, thanks to lucrative orders like offshore plants and drill ships.

“The dockyards of shipbuilders these days are almost full and this means companies don’t have to bid low just to get orders,” says an official from the Korea Offshore and Shipbuilding Association. “They can select profitable orders,”

For next year, experts expect a lingering recovery phase for shippers still feeling the effects of the financial crisis in Europe a few years ago.

The report from Hyundai Research Institute states that unprofitable orders won in 2011 will still be an Achilles’ heel for shipbuilders. The institute predicts the number of new orders for vessels will rise slightly and deliveries will be similar to this year, but the profitability of shipbuilders will not improve much.

Shipbuilders also see last week’s Supreme Court decision on base salary as a potential burden. The court ruled that bonuses should be included in base salaries, excluding vacation and other welfare allowances, in a suit filed by employees of an auto-parts maker against their company.Currently, all of the big three shipbuilders are awaiting court decisions involving similar lawsuits.

“The court’s decision will affect the calculation of our overtime, nighttime and holiday work payments,” says an official from one of the major local shipbuilding companies. “The shipbuilding industry has a lot of overtime work to meet delivery deadlines of customers, and if the payment system changes, shipbuilding companies will be concerned about heavy labor costs.”

While basic salary is an internal issue in business, analysts suggest Korean shipbuilders are expected to find their way to profitability in offshore facilities and LNG carriers next year due to rising resource developments in the deep seas and major shale gas companies entering the LNG market.