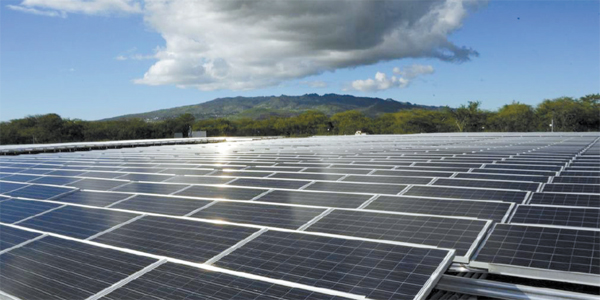 This 5-megawatt solar power plant at Kalaeloa Renewable Energy Park in Oahu, Hawaii, is the largest on the island. It was built by Hanwha Q Cells. Provided by the company

The group said Hanwha Q Cells, the German company it acquired last year, has operated in the black since September, while Hanwha SolarOne also is expected see a sales increase and cost savings in the fourth quarter.

The group said that when core affiliate Hanwha Chemical begins full operation of its polysilicon plant in Yeosu, South Jeolla, next year, it will complete the vertical integration of its solar business, from manufacturing components to power generation.

Hanwha has been focusing on the solar power business in recent years as Kim Dong-kwan, the eldest son of Hanwha Group Chairman Kim Seung-youn and potential heir, has been sent to the forefront of the business by becoming chief strategy officer in Hanwha Q Cells in this summer.

Last week, Hanwha Q Cells completed construction of a 5-megawatt solar power plant called Kalaeloa Renewable Energy Park in Oahu, Hawaii. The company said it is the biggest solar power plant in Hawaii and it will pursue generating 24 megawatts of solar power in the state.

Hawaii aims to generate 40 percent of its total energy from renewable energy sources by 2030.

Hanwha SolarOne also has been exploring the China market. On Dec. 4, the company signed a memorandum of understanding with China’s Jiangsu Zhongtian Technology to supply modules for two plants in Nantong and Jiangsu that will supply a total of 150 megawatts.

And two weeks ago, it signed a deal to supply modules to China Huaneng Group, the world’s second-largest power producer, and reached an agreement with Chint Group.

Hanwha said there are some signs of recovery in the solar sector. Global solar module installed volume was 31.3 gigawatts last year and is forecast to reach 34.5 gigawatts this year and 40.8 gigawatts in 2014.

“There has been industry restructuring as some solar power companies have shut down the past two years,” Hanwha said in a release. “The market is growing because of a diversification of demand from Europe, Japan, China and the United States.”