Homeplus CEO connects with his customers

Homeplus CEO connects with his customers 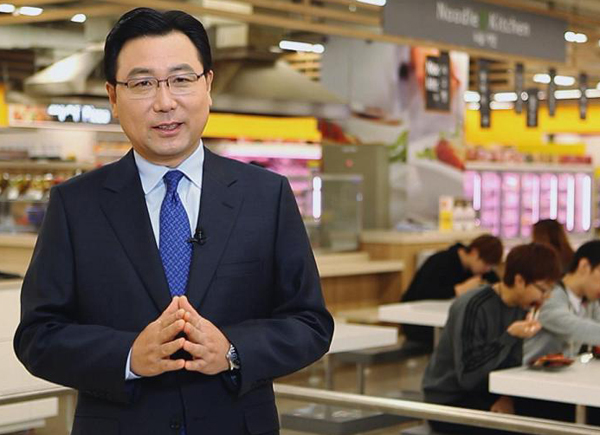 Homeplus CEO Do Sung-hwan explains the remodeling of seven stores in a video message posted on YouTube, Facebook, Twitter and a blog Thursday. Do said the new salad bars have been very popular. Provided by the company

While large discount-store chains battled business regulations and the economic downturn, Homeplus CEO Do Sung-hwan has concentrated on promotion and attracting customers.

Homeplus has recently remodeled seven stores under the theme of “retailment,” a combination of retail and entertainment.

In his video, the CEO said salad bars in the food courts of the renovated stores are generating positive responses from customers and are also contributing to sales growth.

The salad bar is a benchmark of leading retail stores in England, the United States and Japan, in which professional chefs and buyers develop about 70 dishes and introduce 35 menus among them.

“At the salad bar, customers can put as much food as they want in a 5,000 won salad box, where Chinese, Italian and Indian foods are served,” said Do.

“About 500 people per store use the salad bar every day. We believe the new salad bar is emerging as the critical key to shopping at Homeplus.

“Furthermore, with the small change of introducing a salad bar, customers were able to experience a variety of fun. Homeplus is continuing to make efforts to transform stores to present customers with happiness, pleasure, abundance and better taste.”

The remodeled stores of Homeplus also have a Fashion Mall featuring the latest popular clothing brands such as Uniqlo and TOP10, an Imported Food Corner, Hands-on Electronics Store, a Sangsangnori playground for children and Sweet World.

Such changes have boosted sales at remodeled stores by 15.6 percent. Homeplus said it plans to continue remodeling and transforming its stores next year.

“When we first tried to create a salad bar, there was opposition and fear of failure, but we believed that making changes and appealing to customers were what we needed to do,” said the CEO.

“With the courage to make changes and thorough preparation, we will accomplish happy growth.”

Do was named CEO of Homeplus in May, succeeding Chairman Lee Seung-han, who had led the nation’s second-largest retailer since its founding 14 years ago.