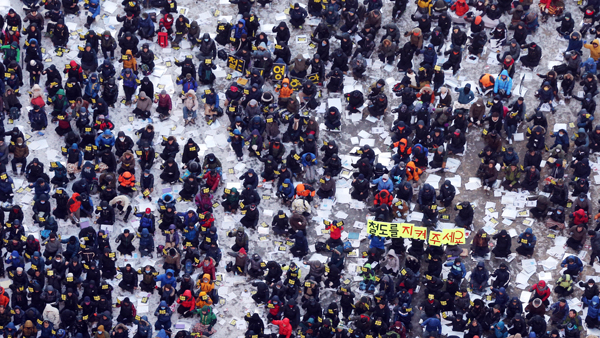 Members of the Korean Confederation of Trade Unions held a rally Saturday in Seoul Plaza to denounce the government’s attempt to “privatize” the debt-ridden Korea Railroad Corporation. [JoongAng Ilbo]

Cosmetics are a must-buy item for Chinese shoppers when they visit South Korea. The next best seller is cigarettes. Korean cigarettes produced by KT&G (originally Korea Tobacco and Ginseng, but now changed to Korea Tomorrow & Global) are far better than Chinese cigarettes in taste and quality.

KT&G has been through two major turning points in its history - the opening of the tobacco market in 1988 and the privatization of the company in 2002. Despite heavy competition from multinationals like Benson & Hedges, Philip Morris and British American Tobacco, the company remains solid, even without monopoly status or government protection. In fact, it accounts for 62 percent of the domestic cigarette market and is the world’s fifth-largest tobacco producer. It has also succeeded in business diversification, with cigarettes now accounting for just 70 percent of its revenue, down from 90 percent. Thanks to the commercialization of ginseng products, it also markets health and cosmetic items.

As a state entity, the company had more than 12,000 employees, but today it is 60 percent smaller with just 4,500. Even with those cuts, KT&G sales increased to 4 trillion won ($3.79 billion) with an operating profit of 1 trillion won.

Under heavy competition from multinational counterparts, the company inevitably had to shake off its lax management. It instead went on a stringent diet, building resilience and survival skills. The company first improved its products’ quality, no longer able to rely on domestic consumers. Last year, it sold 45.1 billion cigarettes overseas, along with close to 55.3 billion sold at home. The company also cut off ties with the government by shunning revolving-door or “parachute” appointments from the government. Outside directors act as stern gatekeepers and chief executives are mostly recruited from the inside for independent and stable management.

The standoff between the government and union workers of Korea Railroad Corporation has killed the idea of privatization. The union and government both refer to it as a dirty word. Why has privatization earned such a bad name? The Korean Gas Corporation has turned into the profitable SK Gas. Debt-ridden Korea Heavy Industries morphed into Doosan Heavy Industries. Does anyone believe Posco or KT were corporate failures? Few privatizations have failed in this country so far.

Controversial privatizations of the water system in Bolivia and the railway system in Britain are most often cited as examples of failures. But there are more success stories than failures. Germany and Japan succeeded in privatizing their public railway systems. Deficit-ridden railway operators turned profitable after they were privatized, even though fares did not go up sharply. The turnaround of Deutsche Post is a model case. After it was liberalized and broken up into the postal service, a telecom company and a postal bank, the lighter Deutsche Post sought business opportunities overseas. It gained a majority ownership in the U.S. parcel operator DHL and is now the world’s biggest and most successful logistics operator.

The 38.7-kilometer (24-mile) Jeongseon rail line is famous for its scenic views. The rail tracks were originally installed to transport coal 51 years ago, but coal cars ceased to exist. Instead, passenger trains pass - mostly empty - twice a day. The line earns 89 million won a year but needs 1.69 billion won for maintenance and operation. Because of money-losing lines like these, Korail received a public subsidy of 500 billion won last year. But rail workers violently oppose the shutdown of old lines like Jeongseon or any attempt at privatization. It may be just that Korean taxpayers are too nice and understanding.

Gone are the days when railways served as the principal mode of transportation. Expressways and cheap airlines offer alternatives for long-distance travel. Line No. 9 of the Seoul subway is almost entirely automated, and American e-commerce company Amazon.com is testing unmanned drones to deliver goods. One day, trains, too, will run fully automated.

The railways will always be important transportation entities as they are fuel efficient, fast and can transport freight and passengers on a large scale. But railways cannot stay public forever. Market competition and opening served well for KT&G. Privatization may be the best prescription for Korail, too. With technology and market competition heating up, rail workers may be on their final strike.