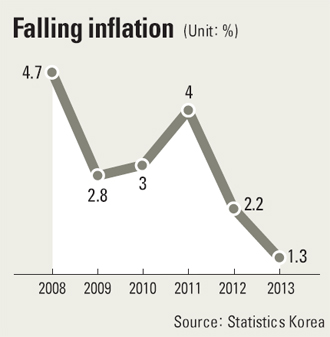 The year ended with inflation hitting its lowest rate in 14 years. A boon for the housewife, but another possible signpost along the road to the kind of deflation that plagued Japan for more than a decade.

According to Statistics Korea, consumer prices for the whole year grew 1.3 percent compared to 2012. That was the lowest level of consumer price growth since a 0.8 percent expansion in 1999, when the country was still deep in the grip of the Asian financial crisis that started in late 1997.

Consumer price growth for December was only 1.1 percent compared to the previous month.

The government cited eased pressure on agricultural, marine and petroleum goods as main contributors to the low inflation.

Compared to a year ago the consumer prices of agricultural goods and marine products fell 0.6 percent, largely thanks to the favorable weather. For the first time in four years, no typhoon wiped out farmlands last summer and there were no unseasonable temperatures.

The price of petroleum goods saw a sharper drop of 3.3 percent year-on-year largely thanks to the stabilized crude prices on the international market, as well as a favorable exchange rate. The Korean won has been strong against the U.S. greenback, which made petroleum imports cheaper.

But the government also cited slow economic expansion as the main reason for one of the lowest inflationary periods the country has ever seen.

“As economic recovery was overdue, pressure from the demand side has been weakened,” the Finance Ministry said in a release.

Yet the government maintained its recent outlook that consumer prices will rise further this year.

On Friday, the Ministry of Strategy and Finance, while announcing its economic policy direction for 2014, projected the economy would expand 3.9 percent this year. With a near 4 percent expansion, the government forecast that inflation will rise and predicted a 2.3 percent growth in consumer prices.

“Pressure from growing demand resulting from an economic recovery is likely,” the Finance Ministry said.

The state-run Korea Gas Corp. said the decision was made as it could no longer ignore the rising raw material prices, which have not been properly factored into its primary costs and were therefore affecting its overall financial situation.

The hike in the gas bill is expected to raise consumer prices by 0.12 percentage points.

There have been growing concerns over the low inflationary pressure and fears of Japan-style deflation.

In a report last month, the LG Economic Research Institute said the recent low consumer price movement was very much like the one Japan witnessed when it entered its deflationary period.

Kang Joong-koo, a researcher at the institute who released the study, said the government needed to take a more loose monetary policy stance such as lowering interest rates in order to prevent the nation from entering deflation. He said clawing out of deflation was much more difficult than recovering from a simple recession.

“Japan, due to loose policy moves, the strengthening of its currency, financial industry insolvency and continuing low growth, suffered extensive low inflationary pressure,” Kang wrote. He said while the Korean economy has had an average of 2.4 percent growth in the last two years, the average inflation rate was 1.7 percent, which is far below the central bank’s target of 2.5 percent and 3.5 percent.

He added that with an aging society that will shrink the nation’s productivity, keeping the economy at a low-growth, low consumer price moment will only push the Korean economy into an extended period of deflation.

Growth in consumer prices was over 5 percent in 2010 when the economy grew more than 6 percent. However, since the euro zone fiscal crisis dampened global markets and slowed most of the major economies’ growth, Korean companies suffered. This forced consumers in Korea to tighten their purse strings.

In a New Year’s speech, Bank of Korea governor Kim Choong-soo once again stressed that the possibility of the country heading toward deflation was extremely low.

Earlier last month, Kim stressed that the headline or core inflation, which excludes agricultural and energy prices that are sensitive to the seasons, had growth momentum.

However, in the figures released by Statistics Korea, headline inflation growth in December dipped to 1.6 percent compared to the previous year. Growth in November was 1.7 percent.