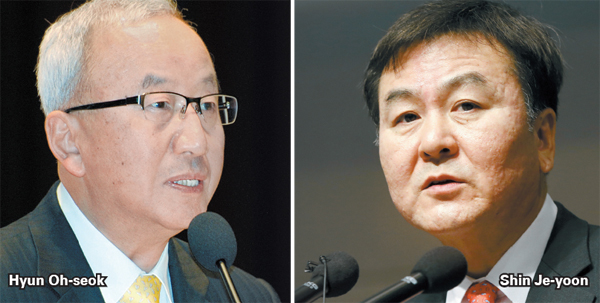 The nation’s top economic chiefs adopted hopeful tones in their New Year messages to the public yesterday despite lingering uncertainties in the global economy.

Hyun Oh-seok, deputy prime minister for economic affairs, pledged to attain economic achievements that will be felt by the general public in his New Year address.

“The first goal of the economic control tower of the Park Geun-hye government in its second year will be to make consumers feel economic improvements,” Hyun said.

The second goal is to maximize job-creation policy effects, the minister said, and the third is to resolve structural problems in the economy.

According to the Ministry of Strategy and Finance’s plan for this year, the government is making an all-out effort to revive the domestic market and create jobs for women and young people.

It seems like the Park government wants to repeat the Roh Moo-hyun government’s success in turning the economy around 10 years ago.

In 2004, the Korean economy made a remarkable turnaround under Roh in his second year after getting through the Asian financial crisis of the late 1990s.

The ministry set its GDP growth target at 3.9 percent for 2014, slightly higher than private forecasts.

It set a goal to create an additional 450,000 jobs, mainly for women and young people, to raise the employment-to-population rate to 65.2 percent.

It also aims to boost private consumption by 1.9 percent compared to last year.

“The economy is facing structural changes like low growth and aging, and the role of finance needs to be changed in response to them,” Shin said. “We will recover the function of micro-financing to dole out benefits of finance to more people in the working class.”

To help establish a so-called creative economy, the FSC will create an objective evaluation system for the new technologies of start-ups and plans to provide funds for them to be commercialized, the chairman said.

Regulations will be eased, a variety of players will be allowed to enter the market, and mergers and acquisitions will be promoted by the government, he added.

“Finance should be a solid stepping stone for the people to stand on their own feet by allowing them to manage assets in a trusted system,” Choi said. The governor promised to develop various micro-financing products.