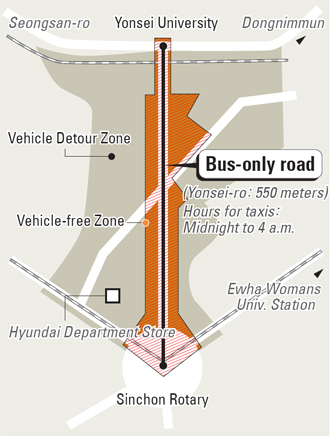 Yonsei-ro, the main thoroughfare that stretches from Sinchon Station to the main gate of Yonsei University, will open on Monday as a newly designated public transportation zone.

Starting next week, only those using bicycles, buses, passenger vans and emergency vehicles will be allowed to use the road. Taxis will only be able to pass through from midnight to 4 a.m., and private vehicles are strictly prohibited.

The road, about 550 meters (1,804 feet) long, previously underwent construction, shrinking down to two lanes and expanding its pedestrian walkways. The sidewalks have doubled in size and have been remodeled to better accommodate those on foot. Substation facilities have also been rearranged. It is the first street in Seoul to ban private cars.

Violators will be fined 40,000 won ($38) for cars, and 50,000 won for vans with less than 16 passengers, and vehicles on the road must not exceed 30 kilometers per hour (18 miles per hour). The road’s 11 buses, which were detoured when construction began, will return to their regular routes.

The traffic system has also changed. A new intersection in front of Severance Hospital will accommodate normal vehicles, which previously had to take Yonsei-ro and make a left turn.

A crosswalk has also been added to the previous one in front of Yonsei University’s main gate. Yonsei-ro will be test-operated as a vehicle-free zone starting at the end of this month.

Yonsei-ro used to be notorious for its heavy traffic and was prone to traffic jams, with approximately 1,200 cars entering onto the road every hour.

Passengers on the 19 buses that passed through the area quickly became disgruntled with the road’s constant congestion. During commuting hours, the previous 4-meter-wide sidewalks were often inundated with street vendors and other obstacles, making it difficult for pedestrians to pass through on foot.