Indie bands give more than music

Indie bands give more than music 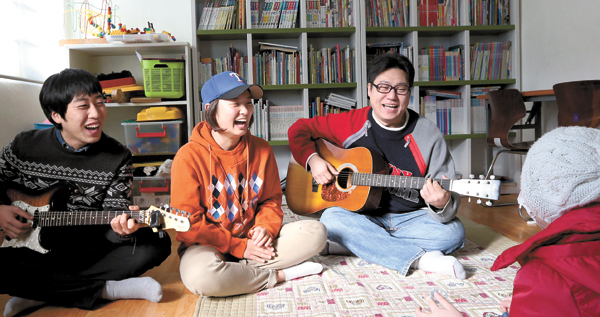 Members of the indie band New Goldfish perform for Hye-won, who has leukemia, on Dec. 22 at a child care center in Gwanak District, southern Seoul. By Kim Seong-ryong

Every month, Sohn Suk-ho, the lead singer of the indie music group New Goldfish, anticipates the 25th - the day he and his band receive their earnings for their songs registered on online music sites.

The group recently decided to donate all the profits generated from their song “Larlala” to an 11-year-old girl named Hye-won, who inspired the piece.

Hye-won was diagnosed with childhood leukemia two years ago and is still receiving treatment for the disease. She and Sohn first met five years ago when he began volunteering at a child care center in Gwanak District, southern Seoul.

Over the course of his weekly visits, the two became close. Despite her illness, Hye-won always smiled and was eager to learn how to play the guitar. Sometimes Sohn’s bandmates even accompanied him.

“I think of your big smile, and running toward the wide open sea with you,” one verse reads.

The band also held a tribute concert for her in March and September last year at a music club near Hongik University, western Seoul. All 2.5 million won ($2,380) of the proceeds generated went to Hye-won.

But the members of New Goldfish aren’t the only indie musicians engaged in charity work. Kim Ku-bum, one of the owners of Willma Guitar Shop, near Hongik University Station, has held the mini concert Music Heals the Mind once a week for more than a year.

All indie bands that appear on stage perform for free, and earnings go toward Dongmyeong Child Welfare Center in Gwanak District. Some of the bands that have joined the cause include Acoustic Collabo and Romantic Moment, which both have substantial followings.

“All of the bands have gladly joined the cause, participating in the concert to help out those in need,” Kim said.

The music club Live and Loud also held its own charity concert on Monday, which featured several jazz artists. It was the 16th concert of its kind, and proceeds are used to deliver goods to the elderly.

“Through hosting 16 concerts, we have delivered nearly 5,000 briquettes to seniors who live alone,” said Cho Jung-hee, a jazz vocalist who has taken part in every charity jazz concert held at Live and Loud since its start last year.