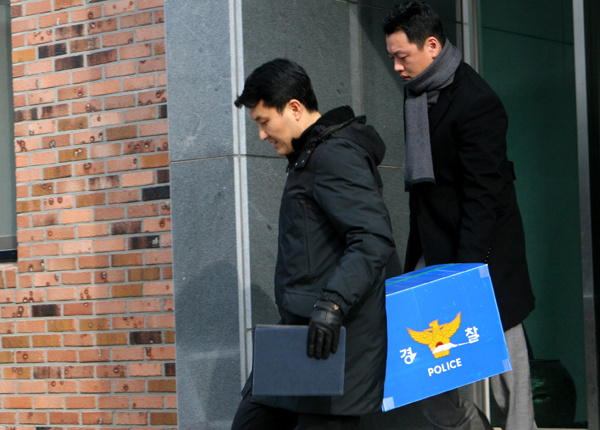 Police officers remove a box of documents detailing transaction records that they confiscated from a lumber company yesterday in Gangneung, Gangwon, which supplied wood used for the reconstruction of Sungnyemun. [NEWSIS]

Police yesterday raided a lumber company on suspicion of supplying substandard wooden products to restore Sungnyemun, a cultural heritage gate that was destroyed in a 2008 arson attack.

The gate - Korea’s National Treasure No. 1 - reopened in May after a massive five-year restoration, but substantial cosmetic damage has since been found on the structure.

They are looking at whether the company provided Russian-made pine timber instead of Korean timber. Gumgang pine trees, which were supposed to be used to replace burned columns, are praised for their resiliency, straightness and high density. The price of the pine timber averages 50 million won ($47,400) per tree, while Russian timber is known to sell for much less.

The company in Gangneung, Gangwon, is owned by Sin Eung-soo, 72, the chief carpenter assigned to oversee the restoration. The police are questioning Sin, who has denied using Russian timber in the repairs. The raid came after speculation about the use of substandard wooden products first surfaced last month. Police began the investigation right after, sifting through data and documents obtained by the Cultural Heritage Administration, which is responsible for preserving and promoting Korea’s historical landmarks.

At a parliamentary audit in October, lawmakers pointed out substantial cosmetic damage to the gate, in particular to the dancheong (traditional color decorations for Korean wooden structures), which is supposed to be the centerpiece of the treasure.

Along with the coloration issue, there have been a spate of reported cases involving cracks, exfoliation and discoloring on the first and second floors.

After an archaeological excavation, the restoration kicked off in 2010. The Korean government spent about 27.7 billion won for what is likely to be one of the most high-profile restorations of a cultural property in Korean history.

The intellectual crime division of the Seoul Metropolitan Police Agency, which is in charge of the case, vowed to conduct a thorough investigation, emphasizing the significance and potential far-reaching consequences of the alleged haphazard restoration.