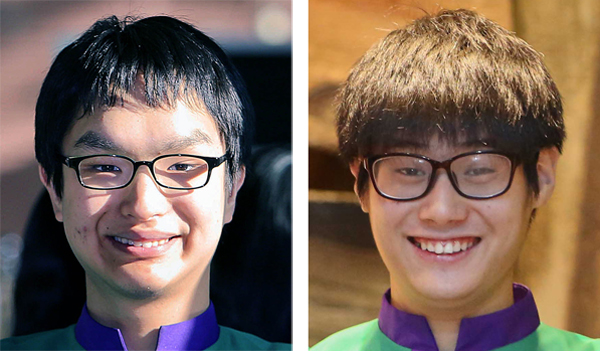 Kim Joo-hyeon is known for his great smile. The 21-year-old has been working as a guide and greeter at Lotte World, an amusement park in Jamsil-dong, Songpa District, in southeastern Seoul, since October.

The young man is just one of more than a dozen employees there with severe disabilities who make a living working a few hours a day.

For the workers and their families, the job is a blessing, something that keeps them active and engaged in a society that affords them little such opportunity.

The JoongAng Ilbo recently met with Kim and a few others from the park last Thursday. That morning, his assignment was to greet visitors from 9 a.m. to 1 p.m. in front of the Balloon Flight, a ride on the fourth floor of Lotte World. Though he didn’t speak much, his smile was infectious.

A long line of children were standing outside the entrance. They said hello to Kim, and he waved back.

Admittedly, Kim’s family and Lotte World were worried when he first started working.

He was diagnosed as having a severe mental disability not long after he was born. And after his father died of a cerebral hemorrhage, Kim began exhibiting signs of autism. His condition has caused disturbances on a few occasions, and he is known to mumble to himself. Some customers even complained.

But with repeated training, and despite initial concern, the young man has settled nicely into his job. He is known around the park as a great guide, with a welcoming smile. Kim has even been awarded praise cards, which are given to employees for their outstanding performance.

For Kim’s mother, Park Hyun-a, the job has been life-changing.

“It is very touching,” she said. “He often smiles and looks confident.”

When asked about the job, Kim replied matter-of-factly: “It is fun and exciting. I want to keep working.”

Workers like Kim have landed these jobs thanks in part to the Songpa District Vocational Rehabilitation Support Center, which began transitional education classes and vocational adjustment classes in 2008.

Throughout five years of the training, about 350 people with severe mental disabilities have been hired at mainstream companies and public organizations. Eleven of the disabled workers who started working at Lotte World came from the center.

“We are teaching them in detail how to get to work on time, how to dress and how to react when they are given instructions from their superiors,” said Kim Na-yeon, a team leader at the center. “I believe the personalized education has made a difference in students landing actual jobs.”

At Lotte World, the disabled workers earn 587,000 won ($550) a month, and after a month-long probation period they are contracted for a year, which they can opt to extend.

Even though the daily working period is relatively short, the workers, their families and Lotte World have so far been satisfied with the results.

“We hired 17 handicapped workers … and 13 among them have severe impairments,” said Kang Tae-min, a manager for the human resources team at Lotte World. “I am often surprised to see how quickly they adapt to the environment and do excellent jobs.”

Another worker at the park, Lim Jae-yong, has a moderate intellectual disability. The 22-year-old has suffered from severe social anxiety since he was a child, a result of being bullied because of his impairment.

In the beginning, it seemed almost impossible that he would be hired at a conventional company, but now he is working well, greeting visitors and pushing strollers in the Kids Zone.

“At first, it was difficult to repeatedly teach him how to clean up and how to greet,” said Kim Min-ji, 23, a colleague. “But now he does his job smoothly, just like other guides.”