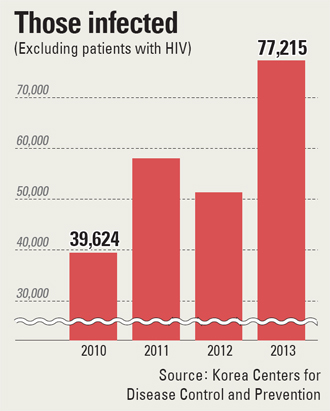 In the wake of global warming, the number of people infected with tropical diseases transmitted by mites or mosquitoes has nearly doubled over a three-year period, according to the Korea Centers for Disease Control and Prevention.

The state-run institute reported on Sunday that 77,215 people were infected with diseases in 2013, up from 51,520 in 2012. Many of these conditions are prevalent in or unique to tropical regions, especially Southeast Asia. The occurrence of infectious tropical diseases is much less frequent in temperate climates due to cold weather.

The center said 10,477 people were infected with scrub typhus, which is transmitted by some species of mites that are found in heavy scrub areas. Of the 10,477 infected, 24 died from the disease last year.

The institute also said that 35 people were found to have been infected with severe fever with thrombocytopenia syndrome, or SFTS, caused by a lethal tick-borne virus. The outbreak of SFTS, first reported in Korea last year, caused seven deaths.

Experts say a rise in temperatures nationwide in recent years has led to the active reproduction of ticks infected with lethal viruses in the country.

“In the 1990s, the country, except for southern areas that have warmer weather, was spared from the tick-borne virus because of temperate climates,” said Bae Geun-ryang, director of the disease control team at the Korea Centers for Disease Control and Prevention. “But as the country has gotten hotter every year, ticks are found almost everywhere now, [which raises the likelihood of infection].”

Bae said it is much more difficult to control the disease borne by ticks.

“We advise people, especially farmers, to wear protective clothes when going into the brush or farms to minimize their exposure to ticks that might carry the virus.”

Due to changes in climate, diseases once considered foreign have also made their way into the country.

Last year, more than 260 people were infected with dengue fever - caused by the dengue virus, which is transmitted by mosquitoes in tropical regions - up 76 percent from 2012. The disease can cause symptoms including fever, skin rash, headache and joint pain.