Victory keeps Madrid in the hunt

Victory keeps Madrid in the hunt 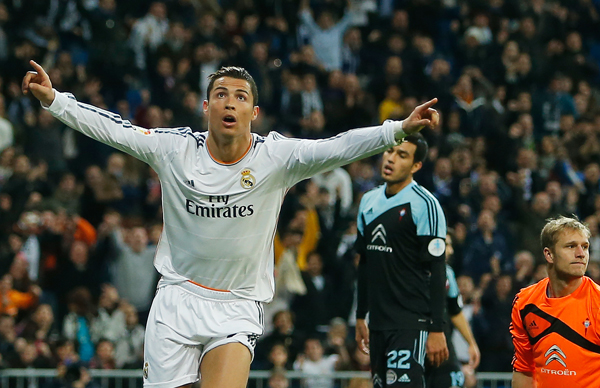 Cristiano Ronaldo scored twice Monday to help Real Madrid beat Celta Vigo, 3-0, to stay in touch with the top of the Spanish standings, and then dedicated his goals to the memory of Portuguese great Eusebio.

Ronaldo said his league-leading 19th and 20th goals of the season “were for Eusebio,” the former Benfica star who died on Sunday at the age of 71.

“He was very close to me and helped me a lot,” Ronaldo said of his countryman. “He is a mythic figure, and for me today is a very sad day.”

Before the match, Ronaldo locked arms with his teammates on the center circle and turned his gaze upward during a minute of silence for Eusebio at Santiago Bernabeu Stadium. Hours before in Lisbon, tens of thousands of people turned out to pay tribute to the 1965 Ballon d’Or winner, who is considered among the best players of all time.

“I appreciate the acts of homage made here at the stadium and throughout Spain,” Ronaldo said. “It’s important to feel the sympathy from Spain and the rest of the world.”

Ronaldo moved one goal ahead of Atletico Madrid’s Diego Costa as the Spanish league’s top scorer by finding the net in the 82nd minute and again in stoppage time from a cross by substitute Gareth Bale on his return from a three-week injury layoff.

Celta’s attack, led by midfielder Rafina Alcantara, created the clearest chances of the match until Karim Benzema broke through from close range in the 67th minute with his ninth goal in league play this campaign.

Madrid’s win after the league’s two-week winter break left it five points behind Barcelona and Atletico, who play each other in the next round in the Spanish capital.

“In the first half we were a little slow and the team wasn’t well balanced,” said Madrid manager Carlo Ancelotti. “They had too many counterattacks. [But] it’s normal after the Christmas break. In the second half, we played with more intensity.”

Celta, coached by former Madrid and Barcelona player Luis Enrique, played the hosts to a standstill in the first half while enjoying the best scoring opportunities.

Striker Charles had a great look six minutes in but failed to beat goalkeeper Diego Lopez one-on-one, and Alcantara had a shot that looked goal-bound when it deflected off a defender in the 37th minute.

Bale had been warming up on the touchline since the half-hour mark, and Ancelotti sent him on in the 65th minute.

Charles wasted Rafina’s through ball moments later by sending his chip shot well wide, and soon the game swung in the hosts’ favor when Benzema fended off his marker and redirected Jese Rodriguez’s short pass into the net.

“The truth is we had problems in the first half, but I think you could see the change after Bale and I went on,” Rodriguez said.

Ronaldo struck again in added time, banging in a cross from Bale to complete his brace a week before FIFA announces the Ballon d’Or winner. Ronaldo is a finalist, along with Barcelona’s Lionel Messi and Franck Ribery of Bayern.

“They have some of the best players in the world, and they punish you if you give them half a chance,” Rafina said.

The defeat pushed Celta down into the relegation zone.