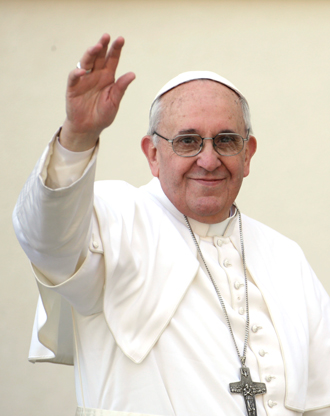 Pope Francis will visit Korea this year, according to sources with the Catholic Bishops’ Conference of Korea (CBCK), 25 years after the country’s last visit by a pontiff.

Although neither the Vatican nor CBCK has made it official, the pope, who succeeded Pope Benedict XVI last March, will probably take part in the sixth Asian Youth Day, a gathering of younger Roman Catholics from around Asia that is scheduled for Aug. 13 to 17 in Daejeon.

A visit is also possible, although less likely, in October when the Korean Roman Catholic Church will complete the beatification of Paul Yun Ji-chung and 123 others who were tortured and killed in 1791 during the Byeongin persecution during the Joseon Dynasty (1392-1910).

The Vatican is currently reviewing the beatifications and has to approve them.

“Should the pope visit Korea, it is highly likely to be either in August or October,” said the CBCK in a statement yesterday. “We will publicize the schedule as soon as his visit is finalized.”

Pope Francis has captivated many people around the world, including non-Catholics, with his humility, devotion to the poor and expressions of tolerance.

He has also addressed some controversial issues facing the Roman Catholic church, ranging from homosexuality to abortion, divorce and the role of women in the church.

In a New Year’s message, Benedict urged Catholics to work for a world where everyone accepts each other’s differences and where enemies recognize that they are brothers.

The CBCK said it had asked Pope Benedict XVI to visit Korea, but a trip to Asia was never realized because of his advanced age and health. The pope volunteered to retire in 2013, citing “lack of strength of mind and body,” ending an eight-year papacy.

Korea has had two papal visits, both by the late John Paul II. He visited Korea in 1984, the 200th anniversary of the arrival of Catholicism, and in 1989 for the 44th International Eucharistic Congress in Seoul. Ahead of the visit, attention is paid to whether Korea will see its third cardinal.

Pope Francis is set to name his first batch of cardinals on the feast of the Chair of St. Peter slated for Feb. 22. The pope could name at least 14 new cardinals, according to the Vatican.

The late Stephen Kim Sou-hwan, Korea’s first cardinal, was appointed in 1969, and its second, Nicolas Cheong Jin-suk, was named in 2006.

On Sunday, Pope Francis announced that he will travel to Israel, the West Bank and Jordan from May 24 to 26, his first visit to the Holy Land. It was the only trip confirmed for 2014. His first foreign trip was to Brazil for World Youth Day last July.