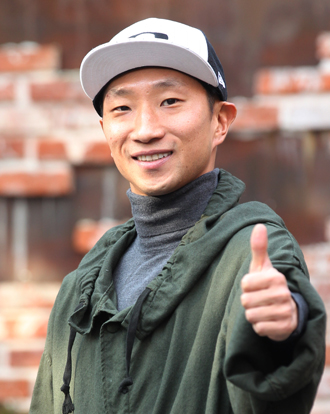 Speed skater Lee Kyou-hyuk will appear in his sixth Olympics next month in Sochi, Russia. By Kim Jin-kyung

Lee Kyou-hyuk, 36, is a speed skating icon in Korea. After joining the national speed skating team at the age of 16, Lee was considered to be the youngest Korean to win the country’s first Olympic gold medal in speed skating. When he was just 18, he set a world record in the men’s 500 meters during the World Junior Speed Skating Championships in 1996. He went on to set another world record in the men’s 1,000 meters in the 1997 World Speed Skating Championships. Although he has participated in five Winter Olympics, he has never won a medal.

Ilgan Sports, an affiliate of the Korea JoongAng Daily, sat down with the veteran skater, who said the Sochi Winter Games, which begin Feb. 7, will be his last.

Q. The Sochi Games will be your sixth Olympics. How do you feel about this?

A. I don’t feel anything special. I tried to continue my career as long as I could and somehow I’m here, but I never expected that I would be able to participate in the Olympics six times. But I’m not just going there without a purpose. I really want to claim an Olympic medal. I will try my best to accomplish that goal, just like I have always done.

People thought the 2010 Vancouver Olympics was your last one. Why do one more?

My mother actually persuaded me to stop skating because she was the only person who knew how much of a hard time I had in the past. But since I decided to follow her advice, I was kind of mentally depressed because I really had no idea what to do next. I then decided to skate one more year to prepare for a nice retirement because I didn’t want to suddenly disappear. But during the year, I won the International Skating Union’s World Sprint Speed Skating Championships in January 2011 and kept myself in good shape throughout the year. I didn’t think about another Olympics, but I think my efforts to remain as a competitive skater led me to Sochi.

Your first appearance in the Olympics was in 1994 in Lillehammer [Norway]. How would you describe your experience?

Everything was fun. I just enjoyed being a part of the event because I was only 16 years old, and I just wanted to experience many things so I can be a competitive skater in the next Olympics. One thing I remember is that I wanted to stand on the top of the podium sometime in the future after I saw a medal ceremony.

After Lillehammer, you were in four more Olympics. How do they compare to each other?

In 1998’s Nagano [Japan] Olympics, I was overconfident because I set a new world record in the men’s 1,000 meters in December 1997 and everyone considered me as a hero who could win Korea’s first gold medal in speed skating. After that didn’t happen, I was troubled.

In the 2002 Olympics, I had too much pressure because I had to race in the 500 meters, 1,000 meters and 1,500 meters because Korea didn’t have many competitive skaters. In the 2006 Olympics, I was able to concentrate on the 1,000 meters, but I finished in fourth place, only 0.05 of a second from the bronze medal winner. In 2010, I thought my experiences and techniques from previous events would give me a chance to claim a medal, but things didn’t go well.

Then why do you still keep skating in the Olympics?

Every athlete in every sport dreams of having a happy ending to their career. When people started asking me, in a pessimistic way, about why I still want to be part of the Olympics, I always felt like I wanted to give them a nice answer. I badly want to win an Olympic medal - and that has been my biggest goal for the last two decades. I think my efforts toward that goal are worthy, no matter what kinds of accomplishments I have made.

You’re 36. It must be hard to be a member of the national team.

The reason I was able to be part of the national team was because I tried to learn something from my failures. Being an athlete is hard for everyone, but the people who can make a difference are the ones who think differently about their failures and achievements. I can’t say that I’m physically better than other younger athletes, but I have more experience.

Kevin Overland of Canada, who competed against you in Nagano, is now your coach. How do you two get along?

It’s kind of fun. [laughs] He was one of my competitors in Nagano, and he became a person who teaches young prospects in this country.

We hang out together sometimes and we still maintain good relations with each other.

The Sochi Games are about a month away. How do you feel about that?

I think this will be my last one for sure. Some people ask me whether I will go to the 2018 Pyeongchang Olympics, but I think that is nonsense because I will be 40 then. I can’t predict what kind of outcome I will have in Sochi, but I’m ready to accept it.