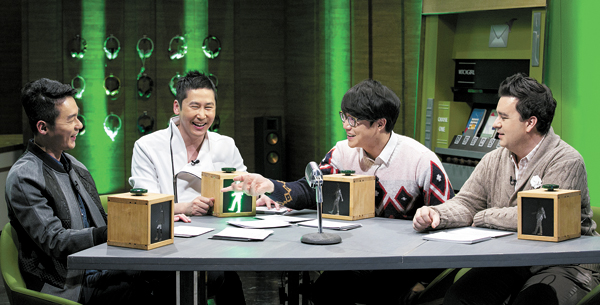 There’s this one little word that every single Korean does, but hardly any Korean dares to talk about in public. Yes, that little word starting with an “s,” then an “e” in the middle and ending with the letter “x.”

But that is not the case for the four TV personalities - three Korean and one Australian-born - who host JTBC’s Friday night talk show “Witch Hunt.” If you think that little word should not be appearing in a family newspaper like this, you may not want to read the rest. But if you are someone who’s been perplexed by the paradoxical side of Korean culture when it comes to love, sex and marriage, this show is for you.

Since starting last August, every Friday at 10:55 p.m. has seen comedian Shin Dong-yeop, singer Sung Si-kyung, liberal columnist and film critic Heo Ji-ung and Australian comedian Sam Hammington talk about the things that most all Koreans do but don’t want to talk about when it comes to love, both mental and physical. These self-professed “guys who have tasted the real fun of life” (in a rather liberal translation), talk frankly about Korean society. This is a show that can answer your questions like “Why are there so many motels in Sinchon, western Seoul, when singles (and their parents) say young people are supposed to remain virgins until they tie the knot?”

The “witch” in the show title doesn’t refer to evil, magical women. It is an abbreviation of the Korean phrase for “a woman with magical charms,” which is also a homophone for the word “witch.”

Each episode has three segments: “Turn on the green light,” “I can hear you lamenting out there” and “Turn off the green light.” This “green light” is a term the show uses that can be best translated as “a good sign of love.”

The four MCs, along with a group of regular guests, address stories from real-world viewers. “Hello, I am a 20-something and have this wonderful boyfriend,” went one message. “We love to go on trips for several days and he rocks in bed. The thing is, though, I cannot go away for more than one week, because of, well, constipation. But it’s just too embarrassing to say this to him and he has started to misunderstand, saying I’m not loving him enough. What should I do?”

From there, the MCs respond with their opinions and experiences, often venturing fare into the land of too-much-information. For this constipated lady, the hosts could come up with no clear solution, aside from the old ideas that “honesty is the best policy” and “love conquers all.” I’m not sure the woman appreciated that advice. 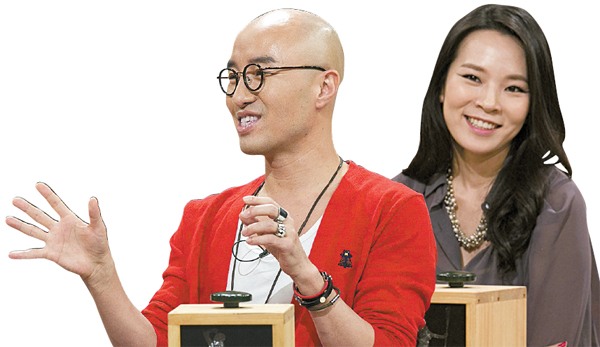 Entertainer Hong Seok-cheon, left, and columnist Gwak Jeong-eun are two of the regular guests on “Witch Hunt.” Provided by the show

But other times, they were able to come up with a real practical solution. One 30-something guy wrote in to say that he really loved his girlfriend, but they had no chemistry in bed. “I want to marry her, but this bothers me. What should I do?” he asked.

The hosts’ answer was nearly unanimous: “Sorry, but chemistry in bed is nonnegotiable. Don’t marry her.”

One recent episode had a 20-something worker write and say that her boss calls her “pudding,” then texts her asking “Is the pudding delicious?”

“I kind of have feelings for him,” she said. “Is this the green light?”

Women guests on the show have been similarly frank. Take Han Hye-jin, arguably the country’s top fashion model. She complained her episode once was “too bland.” “There were not enough bold and sexy stories from the viewers,” she said.

Another guest, comedian Kim Ji-min, once grabbed one of the MC’s thighs and said, “It’s rather mushy. It’s very disappointing.”

Now, I’m a writer with the JoongAng Sunday, which is a sister company with the Korea JoongAng Daily and JTBC, so don’t take my word for all of this. Respected academics have also singled out the program as a genuine social phenomenon.

“Witch Hunt” is “something that has never existed before in Korea,” said Gwak Geum-ju, a psychology professor at Seoul National University. “It can unclog something terribly clogged in Korean society.

And this respected scholar, who added, “This kind of TV show has already been tried and tested in great popularity in countries that we call ’advanced,” is talking about the honest - plus fun - talk on both mental and physical love life, in this society that is still confusingly Confucianist.

Gwak Jeong-eun, a frequent guest of “Witch Hunt” and a columnist specializing in - yeah, what else? - love and relationships at Cosmopolitan Korea, cannot agree more with the professor. “I’m almost proud to be a part of this show,” said Gwak. “It’s a novel TV show that tells us, ‘Hey, talking about sex is not something strange. It can actually be fun.’ And that is something that Korean television has secretly and strangely kept its distance from.”

Not everyone is pleased with the show, though. The Korea Communications Commission, the nation’s top TV regulator, last month issued the show a “severe disciplinary action” for “obscene contents.” 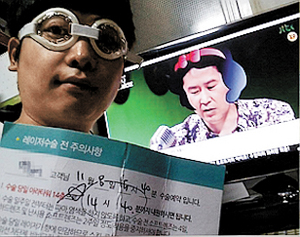 Producers of the show give out tickets to “Witch Hunt” to people who take a picture of themselves watching the show live (no re-runs) and upload the picture on social media. This unnamed person, above, watched the show in spite of getting eye surgery.

But this sort of reaction is far from frustrating for the show’s producers and MCs. Rather, it appears to have given them a boost, confirming that they are breaking taboos that desperately need breaking.

Viewers are responding with a green light of their own. “Witch Hunt” ratings have steadily climbed since its debut and now the program is one of cable’s most popular shows.

But Jeong Sang-min, a 27-year-old pharmacist based in Anyang, Gyeonggi, personally knows how popular the show is. Last month, he made a guest appearance and said the appearance turned him into something of a star himself.

“I was waiting for a friend at Gangnam Station on Dec. 27 last year,” said Jeong, “and all of a sudden, three 20-something women came at me and said, ‘Wow, you are that pharmacist! We are huge fans.’ Obviously, the young women were all ‘Witch Hunt’ maniacs, just like me. I felt both good and embarrassed.”

Jeong added that strangers ask to shake his hand and people whisper “Isn’t that the ‘Witch Hunt’ guy?” when they see him on the street.

What is the power that lifted Jeong’s status from average Joe to semi-star?

“It’s not because I’m someone special but because the TV show has this charm that knocks on the hearts of those in their 20s and 30s,” he said.

“You know, it’s the 21st century, and we all talk about our love lives with friends. It’s not something unusual at all to go to a motel with your girlfriend. It remains something of a taboo, but ‘Witch Hunt’ has brought it from the shade to a sunny spot. The show is really something of an icon for me and my friends.”

The show’s popularity has even crossed the Pacific. Choi Sun-young, a Korean-American and former news reporter now based in Hawaii, said she watches “Witch Hunt” each week. “It scratches my itch for Korean society, where I grew up, because it takes the mental and physical part of relationships and turns them into healthy and fun stories,” said Choi.

No wonder Gwak, the Cosmopolitan editor, can write so proudly of her relationship with a man five years younger than her (something of another taboo in Korea).

“We’re just having fun in making this show,” Gwak said. “But somehow, it’s doing something important for all kinds of Koreans, giving them room to breathe.”