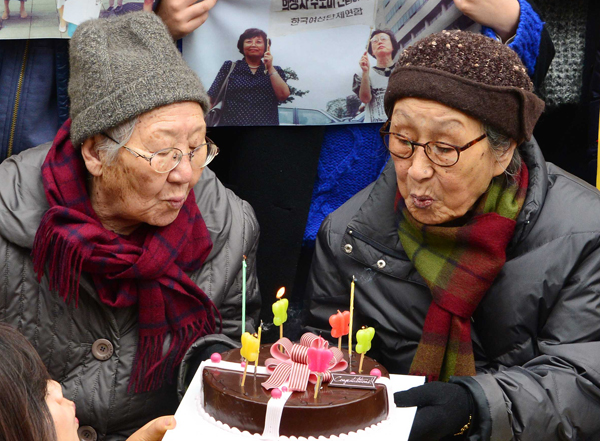 For Kim Bok-dong, 89, the statue’s unveiling had tremendous significance, and it took an emotional toll. The bronze monument showed the likeness of a young girl in traditional Korean attire, her fists clenched and her feet bare.

It represented a generation of women, but it was also a symbol of her experience.

Kim is one of the thousands of women and girls - mostly Korean, but also of other nationalities - known as “comfort women,” who were forced into sexual slavery by the Japanese military during World War II.

She was the only one among the women who was present for the unveiling ceremony last July in Glendale, California. It was the first time a statue had been raised in a foreign country to honor those like Kim.

But her joy has been short-lived. Last month, those who objected to the erection of the monument - a subset of Japanese-Americans and others like them who believe forced recruitment either did not happen or was exaggerated - uploaded a petition onto the Web site of the White House, calling for the removal of the statute. It currently has about 120,000 signatures.

Yesterday, on the 22nd anniversary of the weekly rally led by surviving comfort women in front of the Japanese Embassy in Seoul, Kim sat down with the JoongAng Ilbo to speak about the controversy surrounding the memorial in California.

“I feel a bit anxious about it,” she said. “We just raised the monument for the sake of peace, so I think we don’t need to argue about it. I believe it should not be demolished.”

Although some Korean supporters have signed an appeal to protect the statue, that figure stands at just 23,000, far fewer than the number who protest it. “I hope our government will say something about that - that it is not a matter of controversy,” she said. “One comment from the government would be more powerful than our thousands of words.”

In January 1992, Kim registered with the Korean government as a former wartime sex slave.

To shed light on the human rights violations she suffered in a military brothel for Japanese soldiers, she has traveled the world, visiting the United States, Japan and France.

“Although it has been more than 20 years [since I started my campaign], there has been no answer [from Japan]. The Japanese government expresses no regret, and our government has also not taken clear measures [against the silence]. It is frustrating.”

In 2013, Kim testified about her experiences at a hearing in the National Assembly to raise public awareness around the issue.

“At the hearing, some attendees left when I criticized the current administration,” she said. “I ask [President Park Geun-hye] to clearly resolve this issue as a female president because her father could not do that at the time ... So far, [the president] has not commented on this issue at all.”

According to the Ministry of Gender, Equality and Family, 131 out of the 237 women registered as former wartime sex slaves for Japan have already passed away.

“It hurts me when I remember them,” she said, “because they left this world without seeing the issue resolved.”