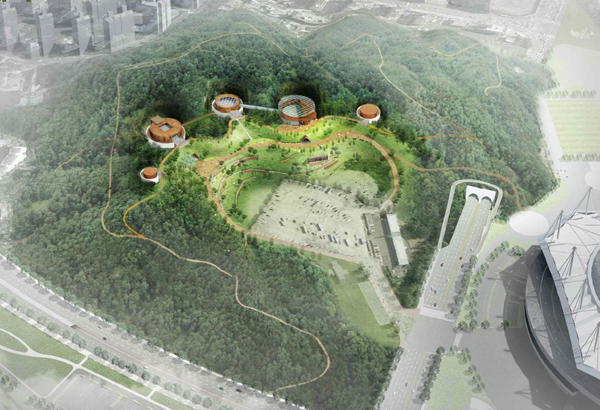 An artist’s rendering offers a bird’s-eye view of the Mapo Oil Reserve Base redevelopment project. Provided by Seoul Metropolitan Government

The Seoul city government announced yesterday that it will transform an abandoned oil reserve base in Mapo District into a public cultural complex. Untapped for more than 13 years, the five dilapidated oil banks at the hillside of Mount Maebong have long been blamed for blighting the landscape.

The city office said that the sprawling 146,245-square-meter (174,908-square-yard) area, which is 11 times wider than Seoul Plaza in central Seoul, will be turned into a community venue for exhibitions and performances. Approximately 27 billion won ($25.4 million) has been set aside for the project.

Seoul said that it won’t demolish the five tanks. Instead, the tanks will retain their original places and be incorporated into the site.

Construction will begin in 2016 after the bidding process is complete next year. The building process will be split into two tracks: In the first phase, the oil tanks and other facilities will be reconstructed, and in the second, the parking area will undergo redevelopment.

The Seoul Metropolitan Government hosted a competition for the project to encourage citizens to submit their ideas for the area. The decision, the Seoul city government said, is based on the initiative of its citizens.

The plan also goes hand in hand with the surrounding facilities. Mapo’s Sangam-dong currently houses a number of broadcast stations, newspaper companies and entertainment agencies, in line with the government’s plan to develop the area as a media-focused and culture-oriented district.

“Near the oil reserve base are diverse culture-related buildings,” said Lee Je-won, director of the urban planning division at the city government.

“We believe the new culture complex reflects the district’s unique characteristics while retaining its originality,” the director continued. “We aim to turn the site into a tourist attraction and a popular community center.”

Lee also emphasized that the complex will be built in an eco-friendly way without being recklessly demolished. One section of the complex will be turned into an information center where citizens can search for environment-related data, pictures and videos.

“We have beautiful parks near the base as well,” Lee said, “so we won’t just arbitrarily destroy original buildings but try to change their functions.”

Established in 1979, the reserve was designated as a military facility, and public access was banned until 2000. In that year, the government decided to move the oil wells to Yongin, Gyeonggi, when the Seoul World Cup Stadium was built.

Officials apparently feared that their presence would pose security concerns during the 2002 World Cup.