Photographer a witness to history

Photographer a witness to history 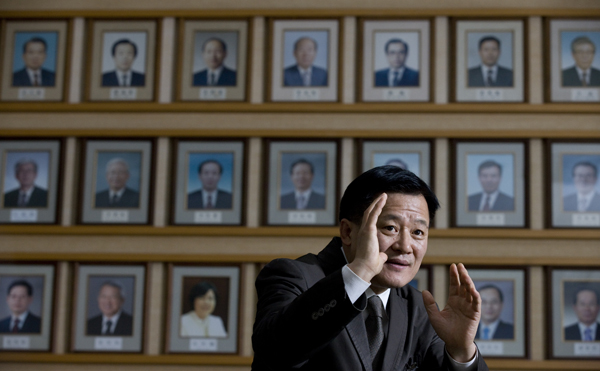 Woo Hyung-geun tells his story in Room 1601 of the Supreme Court building in Seocho District, southern Seoul. Behind him are the portraits of former chief justices and those who have worked in the Supreme Court. Woo took 95 of the 123 portraits. By Kwon Hyuk-jae

Woo Hyung-geun, 58, has worked as the official photographer of the Supreme Court for more than 30 years, following in the footsteps of his late father, who previously held the position.

For two generations, the father and son have documented all the major events of the court. Though Woo is in charge of photographing judges and members of Korea’s courts, he is also known as the Supreme Court’s photographer because he primarily takes pictures related to the events and official schedule of the chief justice.

The job keeps him pretty busy, and he’s been witness to a number of historic court rulings.

Woo was there on Dec. 18 last year, when the Supreme Court ruled on the base salary standard. It was a major moment for the Supreme Court, who took the side of labor and ruled in favor of a group of workers who sued their company three years ago, saying it should include various regular payments such as bonuses and commuting fees when calculating their base salaries. As the thirteen justices, including Chief Justice Yang, walked in and sat in their chairs, Woo went up and down the room, repeatedly pressing his shutter.

After he finished his job and turned around, Yang - as if it had been planned - ruled: “Regular bonuses are included in base salaries.”

The Supreme Court’s first photographer was his late father, Woo Young-sun, who began his work in 1962 after studying photography in Japan. Woo succeeded the job after his father’s retirement at the age of 81.

In about 50 years, the two men have shot more than 100,000 photographs between them. His father took 18,000 during the terms of three chief justices, and Woo has made about 90,000, including for the current Chief Justice Yang - the eighth chief justice Woo has covered.

In their careers, the father-son duo has managed to come full circle.

“My father retired two months after the former Chief Justice Yu Tae-heung took office in April 1981,” he said. “My father took the photos of his inauguration, and I covered the retirement ceremony.”

An hour after the Supreme Court ruled on base salaries on Dec. 18, the JoongAng Ilbo met with the younger Woo in his office to discuss his work and career.

Q. When do you feel happiest as Supreme Court photographer?

A. I work primarily with the Chief Justice, but basically I shoot photos of members of all the district courts, too. I have taken pictures of high-ranking officials and judges of all courts. No matter how many pictures I take, I check the names and faces in the roster and send them with labels. I feel great when they send me back thank you emails.

How busy are you?

I take still pictures, and my colleague Kim I-seok is in charge of video. Two of us do all the work, so we don’t always have enough time. It used to be a bit more relaxed, but digitalization in the 2000s changed everything entirely. There are only 234 official events this year, and we usually go to more than 300 events a year.

What is your most memorable photograph?

The most memorable photographs are the portraits of the former chief justices in Room 1601. Among 123 photos, I took 95 since the court was located in Seosomun-dong [Jung District, central Seoul] in the 1980s. I also remember one taken at the completion ceremony for the Seoul Court Complex in 1989. I also take photographs of monthly rulings at the Supreme Court. The justices are more or less conscious of the camera.

Did you ever feel hurt or angry?

Is there any advantage to being father-son photographers?

When former Prime Minister Lee Hoi-chang was working as a Supreme Court judge, he asked me to go with him to an on-the-spot inspection. Watching me take photos, he told me my father must have taught me well. Chief Justice Yang also introduced me to the Polish chief justice and told him that my father used to work in the same position. I think these kinds of words encouraged me.

Is there any privilege of the Supreme Court photographer?

I am the only person who can ask the chief justice to clap his hands or shout a phrase when taking pictures. Sometimes some of them appear upset and then I get cold feet.

What are those pictures? [The bookshelf in his office is full of dozens of black scrapbooks of photos taken in the 1960s and ’70s.]

Unlike today, my father took pictures literally everywhere. In 1962, my father was with the presidents of all the courts who went to the Blue House after a meeting. Park Chung Hee, the chairman of the Supreme Council for National Reconstruction at that time, is playing baseball in a joint sports event by the legal, administrative and judicial offices.

Min Bok-gi, the chief justice at the time, is right next to Park. There is a picture taken when Warren Burger, the former chief justice of the Unites States, visited Korea. In some photos, justices are helping farmers with planting, harvesting and watering rice as part of a volunteer activity.

Why did you decide to follow in your father’s footsteps?

Thanks to my father’s recommendation, I began working at the Supreme Court as a contract worker when I was 20, in 1976. I had a microfilm technician license then. I took time off from my military service and took charge of the camera after coming back. I succeeded him after his retirement. I may not have landed the job if I was doing the same today.

Is there anything you desire?

People tell me I don’t have a masterpiece, but I believe all my pictures are masterpieces. When I meet the chief justice without a camera, I find myself on edge. But I become confident with my camera. It makes me feel so privileged, and I believe I was born to do this.