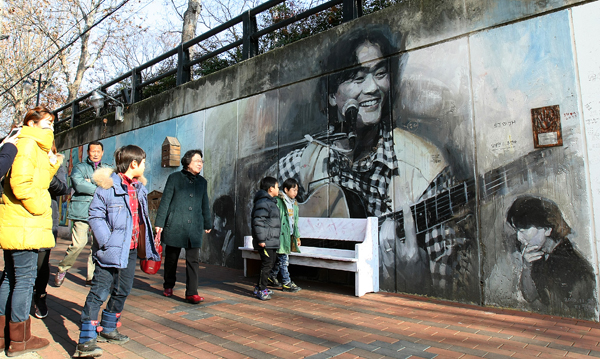 Kim Kwang-seok Road is located right next to Bang Chun Market, in the heart of Daegu. The late singer Kim Kwang-seok lived in a home along that alley until he was 5.

Tourists were busy taking pictures in front of the sculpture of Kim playing guitar while Kim’s signature song, “Around 30,” played from speakers set up around the alley.

Kim was one of the biggest folk singers in Korea in the late 1980s and early 1990s before committing suicide in 1996.

Along with 70 paintings and pictures of Kim that decorate the walls of the 350-meter-long alley, lyrics from his songs are everywhere. At 6 p.m. a concert dedicated to Kim was also held.

“By wandering around every inch of this alley, I recalled Kim, whom I adored since I was young,” said Park Sang-jun, one of the tourists.

“This is my second visit, after last year,” said Kim Sa-ryang, another tourist.

Kim Kwang-seok Road is rapidly becoming one of the hottest tourist destinations in the region. It has long been well-known among Kim’s die-hard fans, but sprung into the mainstream after being featured on a recent episode of JTBC’s show “Hidden Singer.” 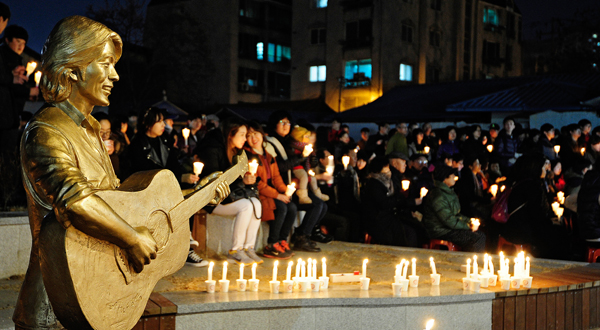 Visitors watch performances on Jan. 6, as part of the events commemorating 18 years since the death of Kim Kwang-seok. [NEWS1]

The road was dedicated to Kim in September 2010, and dozens of people visited it most days the following year. But that number rapidly grew into the hundreds after Kim’s hits played on “Hidden Singer.”

The rising popularity has even revived the nearby traditional market. Beforehand, the 62 shops in Bang Chun Market were nearly deserted. But these days you can find many people in those stores.

“One out of 10 tourists visit the market,” said Shin Beom-sik, the president of the market. “Seven new shops were set up recently.”

Local artists and merchants cooperated to establish the road. They thought of Kim when they were looking for a way to save the nearby streets and the traditional market, which had become a crime-ridden district.

The artists decided to decorate the alley where Kim was born with murals and artworks. Even though his childhood home is long gone, more than 30 houses that were there when Kim was a child are still standing, giving the alley a flavor of Kim’s day.

With 75 million won ($70,500) from the Jung District Office, two life-sized sculptures of Kim and murals were created, and speakers were also installed.

The district office still is not done and is planning to team up with a local broadcasting station to introduce fans’ stories and play some of Kim’s songs. There will also be a place where visitors can sing his songs.