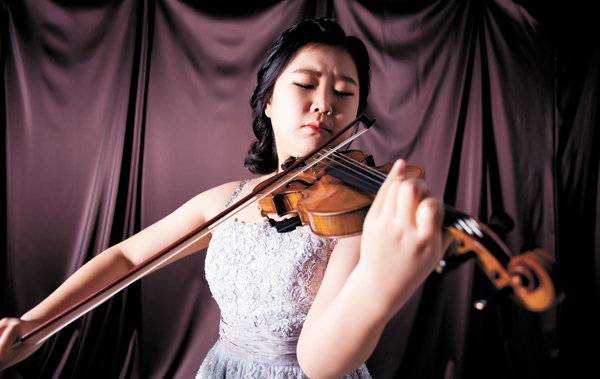 Last June at the press conference for The Great Mountains International Music Festival, a 12-year-old girl took to the stage and - with her violin in hand - sent shivers down the spines of all who listened.

The girl was Korea’s newest violin prodigy, Lee Soo-been, who the festival director, Chung Kyung-hwa, had discovered in an online video.

“I was astounded,” said Chung of the video of Lee playing at the Yehudi Menuhin International Competition for Young Violinists in Beijing in 2012. Lee landed in second with that performance, impressing Chung, who is one of Korea’s most highly regarded violinists.

With the techniques and poise of a much older performer, Lee went on to win the juniors’ competition at the fifth Moscow International David Oistrakh Violin Competition in 2013, as well as the European Union of Music Competitions for Youth award, earning plaudits around the world.

With such accolades behind her, this year is set to be another big one for Lee, who is now 13 years old. She has been invited to perform in Moscow and to attend festivals in Poland, Spain and Austria. But when she’s not on stage, Lee is just another teenager, enjoying her free time at her family’s home in Incheon. The JoongAng Sunday caught up with Lee at a studio in Seongbuk-dong, northern Seoul, on Jan. 6.

“I get nervous before each performance,” Lee confessed. “If I didn’t, I wouldn’t be human. I get nervous 10 minutes before showtime, but when I do some breathing exercises and pray, I feel better.”

And once she starts playing, Lee said she “forgets all about it.”

“When it’s all done, I can’t even remember how nervous I was beforehand,” Lee said.

Despite impressing the world, Lee is very much a kid, more interested in playing with her puppy than answering questions.

Although completely occupied with her pooch, when the name of Chung Kyung-wha came up, Lee was quick to stop what she was doing.

But Lee’s teacher is no average teacher. She is Kim Nam-yoon, a famed violinist herself who is still active as a performer as well as a teacher.

Just 13 years old, Lee Soo-been has been competing internationally and winning awards since she was 11.

And while Kim may be sparing with compliments, she is regarded as the “godmother of Korean violinists” for having trained countless performers that have gone on to become big names.

Kim is a professor at the Korea National University of Arts and has taught Lee since 2007, when the girl was about to start elementary school.

The two met at an audition for the Korea National Institute for the Gifted in Arts, an affiliated school of the university.

“There were many talented performers, but still she stood out,” said the 65-year-old professor. “Although she hadn’t even gone to school, she was mature well beyond her age.”

Although some may think Kim is lucky for seeing the potential in the then-7-year-old, Lee considers it a blessing.

The daughter of a clergyman in Incheon, Lee is the youngest in her family, with two older sisters and an older brother. Being brought up in the church, she was always surrounded by music, but she wasn’t given the chance to learn the violin until she badgered her mother for lessons at the age of 6. So began her training: a weekly 15-minute session at a community center, but still her gift was plain for all to see.

Soon, everyone was urging Lee’s parents to get their daughter professional training in Seoul. Due to the family’s financial situation, her parents were reluctant to enroll her in an expensive music institution. But when they were told of the institute, a low-cost school designed for talented young people, they changed their minds.

“We had no idea how prestigious the school was,” said Lee’s mother. “So we made no preparations for it. But still, Professor Kim took a liking to her. If we had known about how tough the auditions were, maybe we wouldn’t have even tried.”

Soon, Lee was winning one competition after another around Korea, from Eumag Chunchu to the Korean Chamber Orchestra. So Kim stepped up the intensity of her training, challenging the young girl to “become the best.”

“When I was really young, I’d go cry in the bathroom,” said Lee.

“In second grade, I remember getting told off. I didn’t know where to look, so I stared at her. Then she started yelling at me for being so bold as to look at a teacher in the eyes. So I looked away and then she yelled at me for not paying attention.”

But now, things are different.

“I know that when she reprimands me, it’s for my own good. She’s more like my grandmother now,” Lee said.

In response, Kim said that her tough-love approach was necessary.

“The younger the child, the sterner the teacher needs to be,” said the professor.

“Especially for violinists, they need to be disciplined from a young age. Particularly because Soo-been was the baby of her family, I needed to be strict,” explained Kim, who said as funny as it sounds, she “fought a lot with the kid.”

But now with Lee so much older, “she’s become sneaky,” said Kim.

Kim said that now when she disciplines Lee, the teenager tries to laugh it off and hug her, annoying her teacher at times.

The little prodigy is not so little anymore, and as she’s matured physically she’s also matured as a performer.

“I used to do exactly as my teacher told me to do, but at the Menuhin festival I was told that they could see that in my performance,” said Lee. “Since then I have tried to bring my own style.”

Although Lee’s mom is convinced that without Kim her daughter would not have amounted to much, the sacrifice the family made was also a huge factor in her success.

Lee’s sister had to give up studying piano for her younger sister’s sake, and there was a time when Lee’s mom tried to talk her husband out of ministry and into a regular job that would help pay for their children’s music lessons. To help his wife, who was busy traveling with their daughter to all the competitions and festivals, Lee’s father even started helping with the housework.

“When my practice isn’t going well, I go walking with my dad hand in hand, along with my dog,” said Lee. “Afterward, I feel refreshed. My teacher tells me to practice 10 hours a day, but I can’t do that.”

And while she tries to talk her way out of doing things she doesn’t want to do, Lee admits she has a soft spot for her father.

“If my dad tells me to do something, I tend to do it. He promises to buy me things I want without mom knowing,” she joked.

On Monday, the Daewon Culture Foundation gave Lee an encouragement award. This is the first time in the organization’s history that an award has been given to such a young musician.

“We want to recognize Lee, who has won many awards at international festivals, and we also want to encourage her to become better and make a name for herself in the classical music industry,” said the organization.

“Five years ago when I heard her perform, I knew she had potential,” added Kim Il-gon, the chairman of the board. “I believe she will be a key player in the Korean violin scene.”

But amid the praise, the wunderkind keeps a humble front.

“I don’t think I’m a genius. If I practice a lot, I do well. If I don’t, I fail,” said Lee, who said she was a little uneasy about being called things like “the little Chung Kyung-wha” and a “prodigy.”

Her teacher agreed that such labels might actually work against the budding performer.

“To call her a prodigy is dangerous,” said Kim. “We should focus on her future, not on how she is now.

“She is just a talented student. Koreans are quick to call everyone a genius and a whiz, but I wish they wouldn’t. We should be using words to encourage young musicians to strive more and become better.”

Despite her stellar track record, Lee has actually had some difficult times, too. Last year, she made two big decisions. One was to opt out of middle school and choose home schooling instead.

She didn’t want to spend more time trying out for various arts schools, but she also knew that at an average middle school, she wouldn’t be given the proper music training she needs.

Being a sociable child, Lee regrets that she will not be able to make new school friends, but for now she says she’s happy meeting the teachers at the ballet school who treat her “like a friend,” as well as hanging out with the older students at the Institute for the Gifted.

Another major decision was turning down an offer by the British talent agency IMG. The agency was mesmerized by Lee’s Moscow performance and offered to represent her. But at the advice of her teacher, she declined.

“It would be unwise to have her on the pro circuit without the proper training and preparation,” Kim said. “We need a few more years for her to mature, for her to know herself and to be able to handle all that a professional musician should be ready for.”

If Lee had it her way, she would be out there on the circuit, but she decided to listen to her elders.

“Sarah Chang and Itzhak Perlman are represented by [IMG], so I really wanted to accept, but I decided to listen to my teacher and dad,” said the teenager.

“Plus, I don’t think I could handle being away from my family just yet. For now, I think I should stay in Korea.”

For the time being, Lee said she’s content honing her craft rather than performing in concert halls around the world.

“I love Itzhak Perlman,” she said. “Despite his disability, he is able to move others with his performance. I like Vadim Repin, too. His performances are powerful and fun. Like them, I want to become a musician who can move people while entertaining them.”