Korea brings its bling to Detroit

Korea brings its bling to Detroit 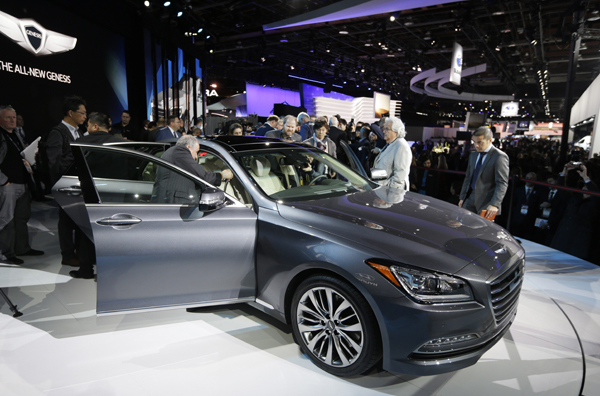 Journalists look over the Hyundai Motor second-generation Genesis at the North American International Auto Show in Detroit on Monday. The auto show opens to the public on Saturday. [AP/NEWSIS]

In Detroit, Hyundai yesterday introduced its all-new 2015 Genesis, the highly anticipated launch of its second-generation premium sedan in the North American market.

Korea’s largest automaker said the full-size premium sedan represents a “bold step” forward for the company as it continues its strategy of marketing premium models under the Hyundai brand, rather than a costly separate luxury brand.

The new Genesis will be built at the automakers’ Ulsan plant with U.S. sales beginning in the spring, at a price starting below $40,000, according to Hyundai.

While the original Genesis won the prestigious North American Car of the Year award after its introduction in 2009, Hyundai is promising the latest Genesis will be better due to its upgraded features.

For the second-generation Genesis, Hyundai is offering a four-wheel-drive system called HTRAC for the first time in its sedan, hoping to appeal to customers in the snowy areas of the United States. It is also offering an application that allows Google Glass, the wearable computer by Google, to control “pre-drive” functions such as remotely starting the car or finding it in a parking lot.

“Hyundai is proud to bring our next-generation Genesis sedan to eager U.S. consumers in just a few short months,” Mike O’Brien, vice president of corporate and product planning at Hyundai Motor America, said in a release. “Market expectations for the new Genesis are understandably high, and we’re confident the Genesis’ combination of superb dynamics, bold design, class-leading safety and driver-focused technologies will exceed those expectations by a large margin.” 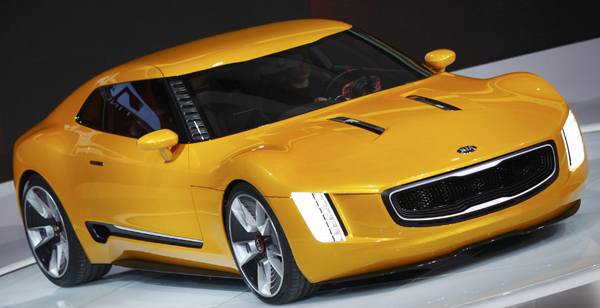 Genesis sales in the United States last year (including the Genesis Coupe) were 32,330 units, about 1,600 units less than 2012 as the aging model entered its final year on the market. Hyundai expects this year to be different.

The automaker had overall sales of 720,783 units in the United States last year, up 2.5 percent from 2012, but it was a lagging performance considering that the overall market grew 7.7 percent year-on-year. Hyundai’s market share was 4.6 percent.

For this year, Hyundai is hoping to sell about 740,000 units and claim a market share of 4.7 percent, according to David Zuchowski, who became Hyundai Motor America’s new CEO this year, replacing John Krafcik.

Zuchowski, who previously worked for Ford and Mazda, told local media that with the release of the new Genesis and the next-generation midsized sedan Sonata later this year, a better supply of top-selling models, which were hit by labor issues in Korea last year, will help the company to achieve its goals.

Meanwhile, Kia Motors joined Hyundai at the auto show to exhibit the GT4 Stinger concept car and its flagship sedan K900, known as the K9 in Korea.

“Driving enjoyment was the number one priority in designing the GT4 Stinger,” said Tom Kearns, chief designer for Kia Design Center America, in a release. “The GT4 Stinger is a throwback to days when driving a car was a visceral experience that wasn’t muted by electronic gimmickry.”

Kia said its U.S. design team in California approached the GT4 Stinger project with an eye toward weight reduction, functionality and pure driving enjoyment, boosted by its on-track success in the Pirelli World Challenge racing series with a pair of turbocharged GTS-class Optimus.

“If anyone were to ask if Kia has the credibility to build a car like the GT4 Stinger, I would simply point out that Kia races and win against some of the world’s most legendary performance brands,” Kearns said.

Kia said its flagship sedan K900 will go on sale in the United States in the first quarter. The company said that with the release of the K900 it has completed a full production lineup from the small car segment to luxury cars.

The automaker is trying to turn around a struggling performance in 2013, which marked a 4 percent decrease to 535,179 units.