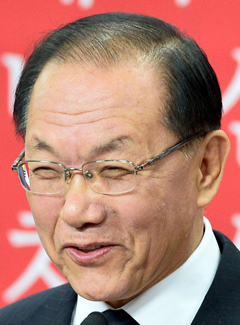 Saenuri Party Chairman Hwang Woo-yea proposed the idea of an open primary to both the ruling and opposition parties as a solution for money-for-nomination scandals ahead of the upcoming local elections in June.

In a New Year’s speech yesterday, the ruling party chairman urged both ruling and opposition lawmakers to enact legislation for an open primary for local elections - a drastic turn from the current system, which is heavily influenced by lawmakers in their constituencies.

“I strongly suggest that both the ruling party and the opposition make a law for a so-called open primary together,” Hwang said. “We will eradicate the potential for corruption in the nomination of candidates for local elections, which is generally regarded as prestigious by local lawmakers.”

An open primary allows ordinary citizens who have no political party affiliation to run in the race.

In previous years, the Saenuri Party and the main opposition Democratic Party have nominated their own candidates for local government elections, in which education chiefs, city, provincial and district heads and councilors are voted into office. Candidates are selected by each party’s nomination committee, which relies heavily on the endorsements of incumbent or former lawmakers who have certain regional connections.

In the past, election hopefuls flocked to local lawmakers, asking for recommendations from party leaders in Seoul - a practice that led to rampant bribery scandals. A series of incumbent and former lawmakers from both parties were charged with bribery involving a money-for-nomination scandal during the June 2010 local elections. Bribery was particularly pervasive in each party’s strongholds - in the Gyeongsang region for the Saenuri Party and in the Jeolla region for the Democrats.

Although many political analysts have called for abolishing the current nomination system, some proponents have argued that without the nomination system, bribery would be more widespread among unqualified, wealthy individuals looking to buy regional votes. “Even if the legalization of an open primary is deemed unconstitutional, our party would launch our own bottom-up nomination system,” Hwang added.

However, the DP, which has called for the abolishment of the current nomination system, claimed Hwang’s proposal was just a shifty way of maintaining the status quo.

“It is an attempt to dilute [President Park Geun-hye’s] pledge to abolish the nomination system,” Park Yong-jin, a DP spokesman, said yesterday at a briefing.

During the December 2012 presidential race, Park, then the Saenuri Party candidate, and Moon Jae-in, her Democratic rival, both pledged to abolish the nomination system.

Since then, the DP has come up with its own regulations to scrap the system and has demanded that the Saenuri Party also keep its pledge. However, the ruling party has reacted tepidly to the issue so far, saying it would be unconstitutional.

Several Saenuri Party lawmakers claimed yesterday that the nomination system could not be withdrawn entirely. “We can’t make a law that goes against the Constitution, even if it was a pledge,” Kim Hack-yong, a Saenuri lawmaker, said at a party meeting. “Both ruling and opposition lawmakers should apologize for making such a pledge to the people without cautious consideration.”