As Games near, skaters set to go

As Games near, skaters set to go 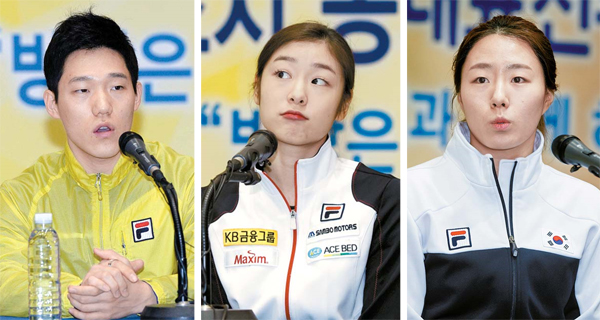 From left: Speed skater Mo Tae-bum, figure skater Kim Yu-na and speed skater Lee Sang-hwa speak to reporters yesterday at the Taereung International Rink in Seoul. The skaters are among those who will represent Korea next month at the Winter Olympics in Sochi, Russia. [NEWS1]

Korean skaters who will represent the country next month at the Winter Olympics in Sochi, Russia, promised to do their best on the world’s biggest stage.

In the media day held yesterday at the Taereung International Rink in Seoul, the stars, including figure skating queen Kim Yu-na and speed skater Lee Sang-hwa - the world No.1 and the world record-holder in the women’s 500 meters - spoke about the challenges they face and asked fans to support them.

Kim, who has already said that the Sochi Games will be her final competition, said she will focus on performing her programs perfectly, regardless of the outcome.

“I can’t actually feel that the Olympics are near,” Kim said. “As I have consistently said previously, my biggest goal isn’t winning the Olympics two times in a row. Because the programs I will perform in Sochi are the hardest ones in my career, I will try to focus on performing them correctly.”
Kim said she will leave for Russia on Feb. 12, and she will start training as per her schedule. “There will be no special training because I consider this event the same as other events, like the International Skating Union’s Grand Prix events that I had participated in the past,” she said. “In the last two competitions I competed in, I was able to find things that I needed to work on, so I’m focusing on those things, including jump skills.”

Kim won the Golden Spin of Zagreb held in Croatia in December and the All-Round Championship held in Korea earlier this month.

When asked about how she feels performing for the last time, she said, “I will be very relieved [after finishing the event].” However, she said she has no idea what she will do after she retires. “I want to enjoy the moment of going back to a normal life without having the stress of training.”

Rising Korean figure skating stars Kim Hae-jin and Park So-yeon, both 17, who will compete with the defending Olympic champion, said they will try their best to improve and to learn as much as they can from their competitors.

Lee Sang-hwa, the gold medal winner of the 2010 Vancouver Olympics in the women’s 500 meters, said that the team will first train in the Netherlands before going to Sochi, adding that she is confident about competing in Sochi as she already has experience there. “I was there in April last year for the World Speed Skating Championship,” she said. “The ice quality of the rink was very similar to the rink I skated on in Vancouver, which is a good sign for me.”

Last year, Lee, 24, won all three of the 500-meter races in the World Cups - two in Calgary and one in Utah - raising her hopes of winning gold at Sochi. She broke her own world record in the 500 meters with a time of 36.36 seconds in November at the International Skating Union (ISU) Speed Skating World Cup in Salt Lake City.

Mo, who won the gold medal in the men’s 500 meters at the 2010 Vancouver Olympics, said he is working on improving his stamina. “I think my techniques are fine. I’m trying to improve my stamina level so I don’t get tired during my race.”

The Korean Olympic Committee said yesterday it hopes to win at least four gold medals in order to be among the top 10 medal-winning nations.